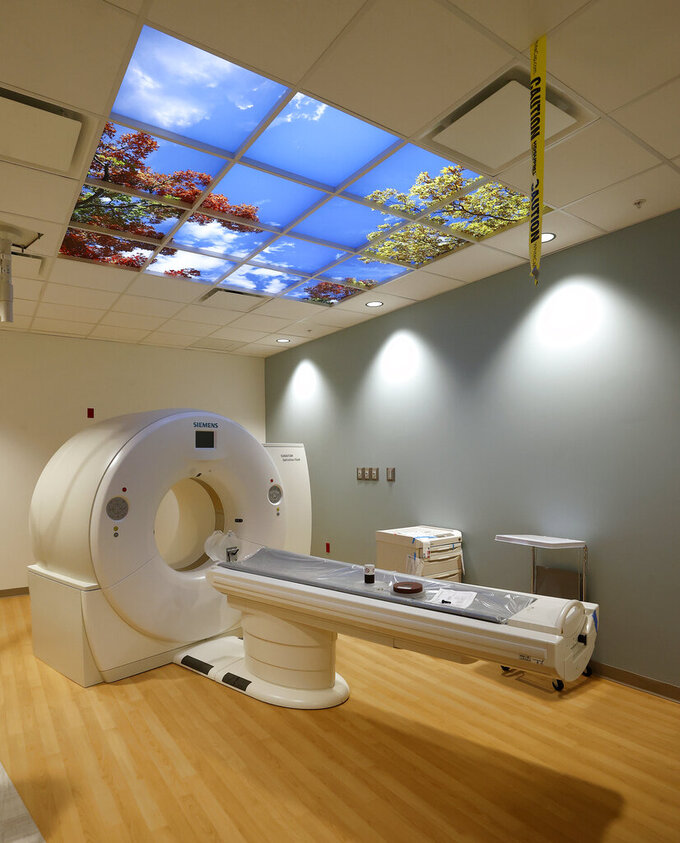 RICHMOND, Va. (AP) — The newest facility in Virginia Commonwealth University Health’s sprawling enterprise is a 17-story, $384 million outpatient tower in downtown Richmond. It opens Dec. 6, consolidates at least seven other buildings’ worth of services into one, and expands the capabilities of the Massey Cancer Center.

For years, patients expressed frustration over the limited number of parking spaces and the challenge of finding the correct clinic in the right building, said Dr. Art Kellermann, CEO of VCU Health.

So in 2018, VCU began construction on an all-inclusive facility at the intersection of East Leigh and North Ninth streets with 1,000 parking spaces, 615,000 square feet of clinical floors and more room to expand.

“The care comes to you, not the other way around,” Kellermann said.

With big windows and natural light pouring in, the building is meant to feel less clinical and more “warm and fuzzy,” said Tracy Longoria, vice president for ambulatory operations. There are 8-foot-tall photos of the James River and the Atlantic Ocean and miles of views out the windows.

With the opening of the Adult Outpatient Pavilion, VCU Health will encompass 92 locations, according to the health system’s website, stretching from Stafford County to the North Carolina border.

The same day the 17-story tower opens next month, VCU Health will unveil an ambulatory surgery center in Short Pump on the fifth floor of the already-standing Short Pump Pavilion.

The projects follow a flurry of construction in recent years: VCU opened a 114-bed, $95 million rehabilitation hospital in Goochland County in collaboration with Sheltering Arms. It built a standalone emergency room in New Kent County last year at a price of $16 million. And it debuted an eight-story, $87 million College of Health Professions downtown building in 2019 that’s now diagonal from to the new tower.

And there’s more to come. The Children’s Hospital of Richmond at VCU will open the 16-story, $400 million “Wonder Tower” in 2023. The Adult Outpatient Pavilion and the Wonder Tower are the two most expensive capital construction projects in VCU Health history, not accounting for inflation.

VCU’s master plan also calls for a new dental school with a price tag of $196 million to be funded by the state between 2024 and 2026.

Plus, VCU Health has an agreement with Capital City Partners LLC, a redevelopment group that purchased the Public Safety Building at North Ninth and East Clay streets, one block west of the outpatient pavilion. The plan initially included a tower with 150,000 square feet of office space for VCU Health. But now that employees sometimes work from home and office space is less a priority, VCU is rethinking how it will use the space, Kellermann said.

MASSEY A ‘STEP CLOSER TO COMPREHENSIVE’

Cancer patients undergoing radiation therapy are often treated in underground, windowless basements. That’s because the devices that emit radiation, called linear accelerators, need to be ensconced in vaults with sometimes 8-foot-thick walls to keep the radiation from leaking.

But VCU Health wanted its patients to be able to look out the floor-to-ceiling windows and see the outside world. So it put its four vaults on the second floor. With the use of high-density concrete, the walls are somewhat thinner, but at least 5 feet in every direction.

The lead door to enter the chamber weighs 27,000 pounds, and supporting that weight above ground level took a massive amount of steel.

“But it was worth it from the patient experience perspective,” said Jake Hughes, a vice president for JLL, the construction’s project management firm.

Because they’re often immunocompromised, Massey Cancer patients will have their own entrance and elevators. When they receive CT scans, they will lie on their backs, looking up at the ceiling. But instead of gazing at plain fissured tiles, patients will look up at glowing tiles with images of trees, clouds and a bright blue sky, as if they’re reclining in a meadow.

There’s cutting-edge technology in the building, including a device that’s a combined MRI and linear accelerator, which can scan a patient, make adjustments and deliver radiation all at the same time. The closest other machines of this type are located in New York and Florida, said Dr. Doug Arthur, an associate director for the Massey Cancer Center.

Massey will occupy five floors of the building, greatly expanding its footprint. The number of oncology fusion chairs, where patients receive chemotherapy, will double from 24 to 48, and they’re contained within varying levels of privacy to suit the patient’s desire. Massey will vacate its current space in the North Hospital.

Expanding is an important step in the Massey Cancer Center’s application for comprehensive status by the National Cancer Institute, said Dr. Robert Winn, the cancer center’s director. Comprehensive is the highest designation a cancer center can reach, and physical space is one component. Massey will apply for the higher status next year, and the move to the outpatient pavilion will get Massey “one step closer to comprehensive,” Winn said.

The added space will allow the center to conduct more clinical trials, which is another box to check. Massey receives about 3,200 new patients a year, and it aims to place 10% on clinical trials.

“This space would allow us to do that,” Winn said.

FURNITURE SHOULD ARRIVE JUST ON TIME

On the day the Adult Outpatient Pavilion opens, Dec. 6, VCU Health will go live with a new electronic medical record software. That’s no coincidence. VCU didn’t want to open the building with one software then transition to the next, so it held back the opening to coincide with the implementation of Epic, said Deborah Davis, chief of strategic initiatives.

Nearly every outpatient specialty will be available in the new tower. But the Pauley Heart Center will stay at its location on East Marshall Street, and the Ambulatory Care Center, which houses outpatient services now, will remain. The vacated spaces will be renovated as the hospital system figures out how to best use them, said Dr. Tom Yackel, president of MCV Physicians.

With the extra space, VCU Health expects to service more than 1 million outpatient visits in fiscal 2022, something it has never accomplished before. The current workforce of 900 physicians is expected to grow 5% to 10% per year, Yackel said, as the need for medical services grows and the population expands. VCU Health also is attracting patients from across the state, the doctor said.

The building is expected to treat 200,000 patients annually, and there’s room to grow. The building has vacant space, or shell space, on four floors, should it be needed. And the foundation of the building can support another five floors on top. HDR served as architect for the tower, and Hourigan is the construction company.

There are 1,000 pieces of art hung on the building’s walls, many from local artists. About half were abstract paintings by Dr. Baxter Perkinson, a dentist and VCU alumnus whose name is on the dental school building.

The furniture is expected to arrive just in time. Like many other things, the building’s sofas and chairs were delayed by the slowing of the global supply chain. But there will be enough furniture to open the building, Yackel said.

“The message to the community is that VCU and VCU Health are all-in for Richmond,” he said.