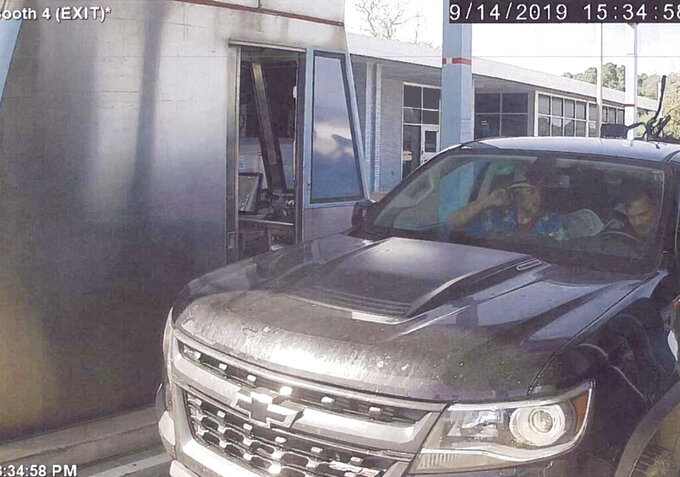 GREENBELT, Md. (AP) — Two neo-Nazi group members intended to engage in terrorist activity before FBI agents arrested them ahead of a pro-gun rally in Virginia, a federal judge concluded Monday.

U.S. District Judge Theodore Chuang’s decision to apply a “terrorism enhancement” in sentencing the men favors prosecutors’ recommendation that both of them get 25 years in prison.

Chuang heard starkly different portraits of the two defendants as he prepares to sentence them at separate hearings on Thursday at the federal courthouse in Greenbelt, Maryland.

FBI agents arrested Lemley and Mathews and a third member of a white supremacist group called The Base. The group has been a leading proponent of “accelerationism,” a fringe philosophy that advocates using mass violence to hasten society’s collapse.

Lemley and Mathews pleaded guilty in June to gun charges. They weren't charged with any violent crimes.

But the judge agreed to apply a “terrorism enhancement” to their sentences, which significantly increases the recommended prison sentences for Mathews and Lemley under federal sentencing guidelines.

“It doesn’t much matter what the specific motivation was,” Chuang said. “But the idea that they were intending to replace the U.S. government is relevant to this enhancement.”

Prosecutors called them domestic terrorists who prepared for a civil war, discussed how to break racist South Carolina mass killer Dylann Roof out of death row and talked about assassinating a Virginia lawmaker.

The court's probation office calculated a sentencing guidelines range of 33 to 41 months imprisonment in both cases. Lemley's lawyer is seeking a sentence within those guidelines, while Mathews attorney is seeking a prison sentence of 33 months.

Chuang isn't bound by any of those recommendations.

Defense attorneys said an undercover FBI agent who visited Lemley and Mathews at their Delaware apartment nine days before the rally tried to cajole them into developing a plan for Virginia. The defense lawyers said the two men decided instead to go meet other members of The Base in Michigan on the weekend before the Virginia rally.

“It’s more than just idle talk,” Assistant U.S. Attorney Thomas Windom said Monday. “There is a core purpose for why they want to do these things.”

Defense attorney Ned Smock said Lemley, an Army combat veteran who served in Iraq, was diagnosed with post-traumatic stress disorder after he returned home. Lemley ultimately fell into a “black hole” of conspiracy theories and propaganda during a dark time in his life, Smock said.

But the defense lawyers said the hundreds of hours of conversations recorded by the FBI didn’t capture any proof that Lemley and Mathews planned or intended to carry out a terrorist attack.

“Everything is a stream of consciousness,” Smock said. “Ideas come up. They’re discarded and never come up again.”

“The government is asking you to make a giant leap of faith,” said Joseph Balter, one of Mathews’ lawyers.

Mathews and Lemley pleaded guilty to charges, including illegally transporting a firearm and obstruction of justice, for destroying cellphones when FBI agents raided their apartment.

The third co-defendant, William Garfield Bilbrough IV, was sentenced to five years in prison after pleading guilty in December to helping Mathews illegally enter the U.S. from Canada in 2019.

The case against the three men charged in Maryland was part of a broader investigation of The Base. In January 2020, authorities in Georgia and Wisconsin arrested four other men linked to the group.