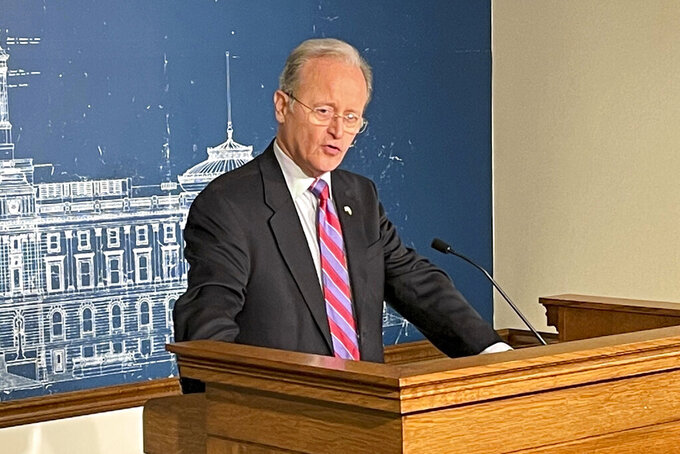 ST. PAUL, Minn. (AP) — A proposal to legalize sports betting survived a test Thursday amid lawmakers' efforts to pull together the pieces of a package to spend Minnesota's enormous budget surplus with just days remaining in the legislative session.

The bill, authored by Republican Sen. Roger Chamberlain, of Lino Lakes, would allow tribal casinos and the state's two horse racing tracks to offer sports betting on mobile devices and in-person. It differs from its House counterpart, which would only let tribes offer sports wagering.

It passed the Senate Finance Committee on a 5-4 vote.

Chamberlain told reporters afterward he hopes to get the bill passed and into a House-Senate conference committee but acknowledged the timing will be tight before adjournment on Monday. Agreement on a final bill may prove difficult as the 10 of the state's 11 Native American tribes represented by the Minnesota Indian Gaming Association oppose the Senate version, while Chamberlain maintains that leaving the horse racing tracks out of the action is a “non-starter.”

“We're very happy to help protect the tribes' business model, I always have been willing to do that, but we cannot allow exclusivity in this case simply because it won't be a good product,” he said.

Several other House-Senate conference committees are still working through the details of bills to parcel out the state's $9.25 billion budget surplus after Democratic Gov. Tim Walz and legislative leaders worked out a deal for spending targets earlier this week. The framework includes $4 billion in tax relief and targets of $1 billion each for education, and health and human services, and $450 million for public safety.

Republican Senate Majority Leader Jeremy Miller, of Winona, told reporters Thursday that tax committee chairs are close to a deal on a tax relief package but time is running out. He said several conference committees, including public safety, remained far apart despite hopes earlier this week to get most of the bills done by Wednesday.

House Democrats tabled discussion on law enforcement and community-based public safety budget items Wednesday, hoping to reach agreement first on items where both sides were closer to a deal.

But Republican Senate Public Safety Chairman Warren Limmer, of Maple Grove, said he wants to see “all of the elements on the table” before moving forward. He made his convening of the conference committee on Thursday contingent on a full offer from House Democrats. Limmer invoked a Wednesday evening incident, in which a police pursuit that ended outside of the Capitol while the House was in session, resulted in a temporary lockdown of the complex.

“I can't understand that the House would walk away from discussions when these kinds of criminal behaviors are happening right on the Capitol grounds,” he said. “We must fund and encourage law enforcement and give them the tools and resources they need at this critical time.”

Walz said he expected top legislative leaders to start stepping in and get more involved to try to get negotiations unstuck, but that he was confident they can come together before the end of the session.

Meanwhile, lawmakers were able to find common ground Thursday on changes to the state's liquor laws and finalize a bill on Thursday. The bill would raise the cap on growler sales to let breweries that produce up to 150,000 barrels annually offer the 64-ounce jugs to go, a change that benefits the state’s six largest breweries, which were too big to offer growlers under the current rules. It would also allow smaller brewers to make direct sales of up to 128 ounces of beer a day per customer. And it would allow local distilleries to sell normal-sized 750 milliliter bottles direct to customers instead of the current 375 milliliter limit.

“We've been hearing from Minnesotans on some of these liquor-related items," Miller said. “I'm confident that this would not have happened without the strong grassroots efforts of the people of Minnesota.”