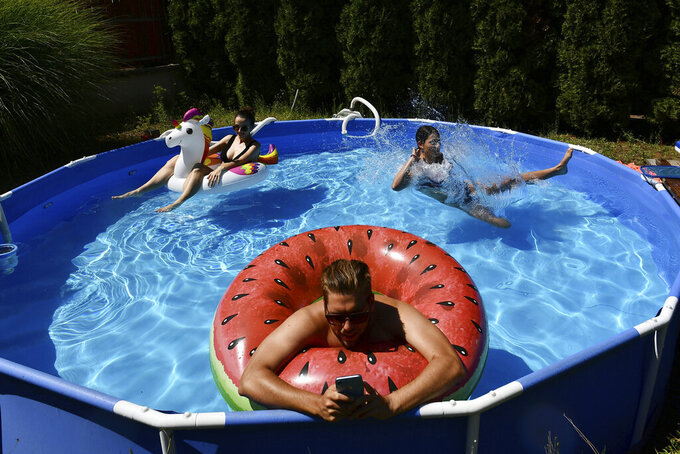 Uncredited, ASSOCIATED PRESS
Barnabas types on his phone as he works from the home office as a pool in the garden while his wife, Rebeka, left and sister-in-law, Emma, cool down in Budapest, Hungary, Thursday, Aug. 4, 2022. Hungary has experienced several heat waves since mid June with day-time temperatures rising to 40 degrees Celsius and remaining at tropical levels through the night. In fact, the country recently shattered record for its hottest night ever when temperature of 25.4 C was measured in Budapest on July 26. (AP Photo/Anna Szilagyi)

BUDAPEST, Hungary (AP) — Inflatable swimming pools are the new must-have item around Budapest as residents of Hungary’s sprawling capital struggle to stay cool amid one of the most oppressively hot summers in the country’s history.

The pools have been popping up everywhere — in shared, open spaces outside apartment buildings, on small balconies, but also in the backyards of suburban houses where surrounding greenery can't mitigate the heat.

To stay cool, Budapest’s residents have been fleeing to relatives who have a house in the forested suburbs or air conditioning at home, sometimes sharing living space with up to a dozen other family members.

Some, like Barnabas Kantor, are taking their work along for a splash. The 29-year-old social media manager has been working on his phone for days while sharing an inflatable pool with his wife and sister-in-law. The sisters installed the pool outside their parents’ suburban home, where the entire family has been staying for weeks to escape the urban heat.

In the city itself, families with small children often stay in their air-conditioned apartments during the hottest part of the day, venturing onto their balconies only after the sun sinks low in the sky to let the youngsters play in the water.

But the rules for conservation of old buildings in Budapest's historic center make installing air conditioning impossible. So the owners of the otherwise prized apartments there spend their days in darkened rooms, in front of electric fans.

Water hoses — another relatively cheap and time-tested means of staying cool during long sweltering days — are also celebrating a big comeback, and are particularly popular with children and pets.

Hungary has experienced several heat waves since mid June, with day-time temperatures rising to 40 C (104 F) and remaining high through the night. The country recently shattered the record for its hottest night ever, when a temperature of 25.4 C (77.7 F) was recorded in Budapest on July 26.