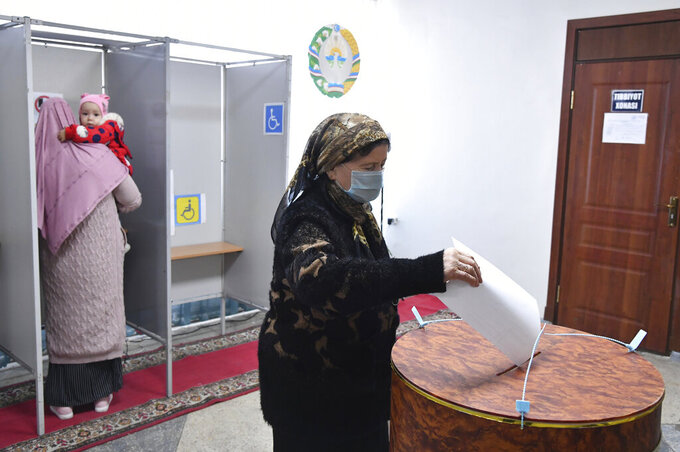 Uncredited, ASSOCIATED PRESS
A woman casts her ballot at a polling station during the presidential election in Tashkent, Uzbekistan, Sunday, Oct. 24, 2021. Uzbekistan's President, Shavkat Mirziyoyev, who has relaxed many of the policies of his dictatorial predecessor but has made little effort at political reform, is expected to win a new term by a landslide against weak competition in an election Sunday. (AP Photo)

TASHKENT, Uzbekistan (AP) — Uzbeks voted Sunday in a presidential election that the incumbent is expected to win in a landslide against weak competition.

Although President Shavkat Mirziyoyev has relaxed many of the policies of his dictatorial predecessor, he has made little effort at political reform.

Mirziyoyev, who took office in 2016 upon the death of Islam Karimov, faces four relatively low-visibility candidates who didn't even show up for televised debates, instead sending proxies who failed to engage in substantial discussions. Independent candidates weren't allowed.

“The other candidates talk about abstract things like strengthening social security, but they don't provide any details. They don't have a real program and they don't have to because they know who will win,” political analyst Akhmed Rahmonov said.

Despite the absence of significant competition, voter turnout was strong. The elections commission said that by 5 p.m. (1200 GMT), three hours before the polls closed, more than 70% of the electorate had cast ballots.

Preliminary results are to be announced on Monday.

The only Mirziyoyev challenger who got significant notice in the campaign was Alisher Qodirov, with his proposal that Uzbeks working outside the country should pay taxes in Uzbekistan, a widely unpopular idea for the large share of the population that depends on remittances from family members abroad.

Mirziyoyev openly disagreed with the proposal and some observers suggested that Qodirov, whose party is in coalition with Mirziyoyev's in the parliament, made it in order to channel votes to the incumbent.

Under Mirziyoyev, freedom of speech has expanded compared with the suppression of the Karimov era, and some independent news media and bloggers have appeared. He also relaxed the tight controls on Islam in the predominantly Muslim country that Karimov imposed to counter dissident views.

He also lifted controls on hard currency, encouraging investment from abroad, and he moved to patch up foreign relations that soured under Karimov.

“Mirziyoyev improved relations with world players such as Russia, China and the West, while also resolving conflicts with neighbors including establishing peaceful interaction with Afghanistan,” said Andrey Kazantsev of the Moscow State Institute of Foreign Relations.

Uzbekistan and Afghanistan share a 144-kilometer (89-mile) border, and Uzbekistan has consistently worried that conflict could spill over. The ex-Soviet republic's foreign minister became the first foreign official to visit Afghanistan after the Taliban took control of the country in August.

Uliana Pavlova and Jim Heintz contributed to this story from Moscow.