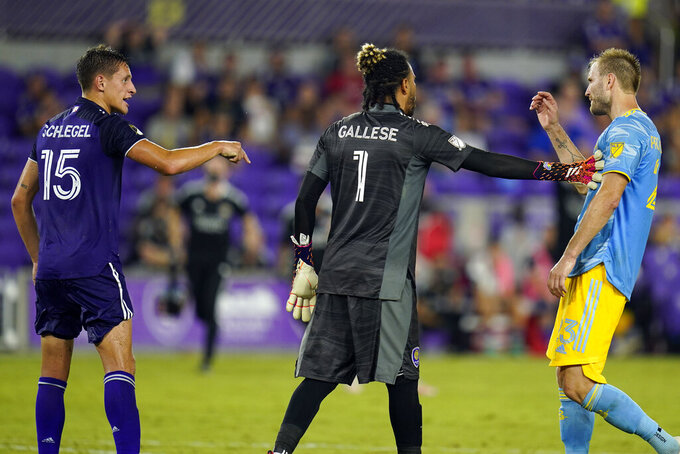 Orlando City (7-3-4) snapped a three-game winless streak and moved past Philadelphia (6-4-5) into second, behind the New England Revolution, in the Eastern Conference.

Michel, on the left side, darted toward the penalty spot and ran onto a ball that split a trio of Union defenders from Mauricio Pereyra before gathering and blowing a roller by goalkeeper Matt Freese to open the scoring in the 10th minute.

Andrés Perea bent an low-arcing ball from a few yards outside the area near the right sideline for a side-netter that made it 2-0 in the 59th. The 20-year-old Perea, in his second MLS season, scored his first career goal July 7.

The 22-year-old Freese made his second start of the season as Andre Blake — who has a career-best 79.6% save percentage this season, third best in MLS — is with Jamaica for the CONCACAF Gold Cup. Freese did not concede a goal before he was shown a red card in the 57th minute against the New York Red Bulls on July 8. Joe Bendik replaced Freese in the 1-1 tie and got his first win as a starter since 2018 in Saturday's 2-1 victory over D.C. United as Freese served his one-game suspension.

Kacper Przybylko's one-touch shot off a cross by Olivier Mbaizo rolled past goalkeeper Pedro Gallese, who finished with four saves for Orlando City, into the net to make it 2-1 in the 68th minute.

Philadelphia lost for just the second time since May 8, the second of back-to-back losses to start the season.