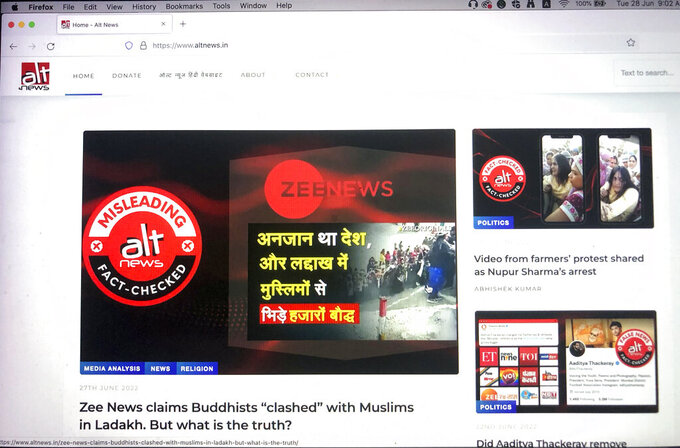 Manish Swarup, ASSOCIATED PRESS
A photograph of a computer screen shows the home page of Alt News, a fact-checking website, in New Delhi, India, Tuesday, June 28, 2022. Police in New Delhi arrested Mohammed Zubair, one of the co-founders of the website, over a tweet that allegedly hurting religious sentiments in what many have slammed as the latest example of shrinking press freedoms under Prime Minister Narendra Modi’s government. (AP Photo/Manish Swarup)

NEW DELHI (AP) — Police in New Delhi have arrested a Muslim journalist for allegedly hurting religious sentiment in what many slammed as the latest example of shrinking media freedom under Indian Prime Minister Narendra Modi’s government.

Mohammed Zubair, a co-founder of fact-checking website Alt News, was arrested Monday evening over a tweet that police said deliberately insulted “the god of a particular religion.” Senior police officer K.P.S. Malhotra said the case was brought following a complaint from a Twitter user and Zubair was remanded in custody for one day.

Journalists across India have been targeted increasingly for their work in recent years. Some have been arrested on criminal charges over posts on social media, where they routinely face threats and trolling. The Twitter accounts of some journalists and news websites have also been suspended on government orders.

The incident set off a wave of outrage, with activists, journalists and opposition politicians decrying it as harassment of the media and calling for Zubair’s immediate release.

“In a democracy, where every individual possesses the right to exercise the freedom of speech and expression, it is unjustifiable that such stringent laws are being used as tools against journalists,” DIGIPUB, a network of Indian digital news organizations, said in a statement.

“Arresting one voice of truth will only give rise to a thousand more,” opposition Congress party leader Rahul Gandhi said on Twitter.

Pratik Sinha, the other co-founder of Alt News, said Zubair was arrested without any notice from police, which is mandatory in the sections of law under which he was detained.

Founded in 2017 as a nonprofit organization, Alt News is India’s most prominent fact-checking news website and has gained a reputation for its reporting on hate speech and debunking misinformation, particularly by Hindu nationalists. Its founders often face online trolling and threats by right-wing groups, some of them linked to Modi’s Hindu-nationalist Bharatiya Janata Party.

Several similar cases have been filed against Zubair in the past. Earlier this month, police charged him with calling some Hindu monks “hatemongers,” news website The Wire reported. The Hindu monks had made inflammatory statements about Muslims and at least one had called for “genocide” of the minority community. The monks were arrested and later released on bail.

Zubair was also among the first journalists to highlight controversial comments made by the now-suspended spokesperson of the BJP on the Prophet Muhammad that created a diplomatic row for the Modi administration. The Indian government distanced itself from the spokesperson’s comments after they sparked a massive backlash from many Muslim-majority nations.

India's rank fell eight places to 150 among 180 countries in this year's Press Freedom Index published by the watchdog group Reporters Without Borders.

“Indian journalists who are too critical of the government are subjected to all-out harassment and attack campaigns,” it said in its 2022 edition, adding that reporters were regularly exposed to police violence and increasing reprisals from officials.

Setalvad was arrested Saturday for allegedly “committing forgery and fabricating evidence” in a case about anti-Muslim riots in Gujarat state in 2002. Modi, who was then chief minister of Gujarat, has denied charges against him, and has been cleared of complicity after government investigators and courts ruled there was no evidence against Modi.

Setalvad has long campaigned for justice for victims of the riots, in which nearly 1,000 people, most of them Muslims, were killed. Her arrest was condemned by global rights groups such as Human Rights Watch and Amnesty International.