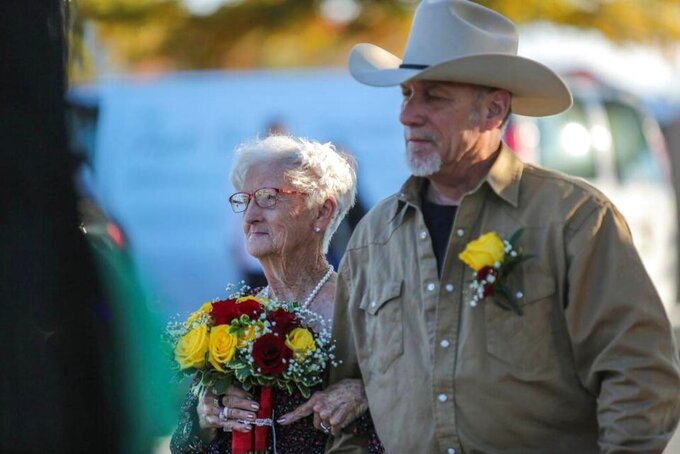 Mary Norkol, ASSOCIATED PRESS
Jane Billedeaux is escorted by her son down the aisle to marry Harris Putnam, her school sweetheart from the 1940s. The couple lost touch for decades before wedding in the parking lot of a Walmart store near Myrtle Beach, SC, where Billedeaux works as a host. (Mary Norkol/The Sun News via AP)

MYRTLE BEACH, S.C. (AP) — It turns out sometimes the backdrop of a fairy-tale ending is the parking lot of a Walmart store.

That was the case for Jane Billedeaux and Harris Putnam, who got married Nov. 13 outside a Walmart near Myrtle Beach, where Billedeaux has worked as a host for nearly 15 years.

It was a long time coming. Billedeaux and Putnam, both 82, attended elementary school together in Shelby, North Carolina, in the 1940s.

“I think we were sweethearts in the fifth and sixth grade,” Billedeaux said.

The two went their separate ways, married other people and didn’t pay much mind to the other. Billedeaux had been married three times, each ending in the death of her husband. A widow for 23 years, she had all but given up on getting married again at her age.

“I just thought, ‘Lord, evidently you don’t want me to have a husband,’” Billedeaux said.

But a few months ago, Putnam came around.

His wife had died in June, and he was looking for another partner. After the passing of his wife, Putnam thought about who may be a good match for him.

“People should get married for the love and mutual support and the opportunity to help the person you love, to make their life better while they’re making your life better,” Putnam said. “It’s going to be a lot more interesting living with Jane than living alone.”

Billedeaux wasn’t so sure at first. She said Putnam was “barking up the wrong tree” when he asked her out with the intention to get married. But she gave him a shot.

Less than a month after their first date, Putnam proposed.

“It feels right, it feels like fate,” he said.

Billedeaux took her time with an answer. Marrying Putnam would mean moving out of her daughter’s home, away from Myrtle Beach and the Walmart that had become a home. But at the same time, she loved Putnam. He treated her “like royalty,” bringing her roses and making her breakfast — always gluten-free, to fit her dietary specifications.

She thought about it for a while, and considered her options.

So the two were engaged. They married under a tent in the parking lot of Walmart in front of around 40 friends and family members. The couple acknowledged it was a strange choice, a far cry from a decorated church or rustic barn. But Billedeaux has found community and comfort there.

Around half of the wedding attendees were employees at the same Walmart. They hugged Billedeaux and shook Putnam’s hand, blowing bubbles and some sporting their employee vests.

For Putnam, he didn’t think much of it. His soon-to-be wife wanted to tie the knot in the parking lot of a big-box store on the side of a highway, and so they did.

“One thing that helps to make a good marriage is frequently saying, ‘Yes, dear,’” Putnam said. “I really believe that.”

The ceremony, planned and facilitated by the Myrtle Beach Wedding Chapel in Little River, was quaint and brief. The minister, Gary Donaldson, acknowledged the winding path that led Putnam and Billedeaux to each other at this point in life. Among metal shopping carts and errand-runners heading to do their weekend shopping, the two promised to spend the rest of their days together.

“When Jane asked me to (officiate the wedding), she told me she won that lottery,” Donaldson said at the ceremony.

The couple is moving back to North Carolina, and they plan to have a date night every week.