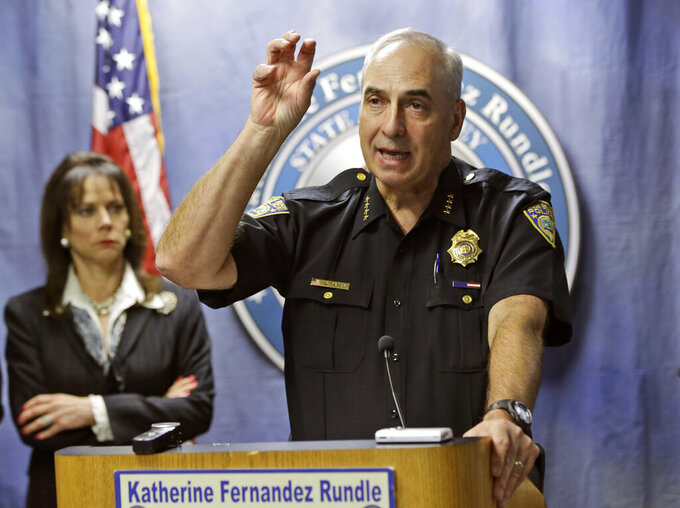 Wilfredo Lee, ASSOCIATED PRESS
FILE - Miami Beach, Fla., Chief of Police Daniel Oates speaks during a news conference along with Miami-Dade State Attorney Katherine Fernandez Rundle, left, Thursday, May 14, 2015, in Miami. Oates, who served as police chief in Aurora from 2005 to 2014 before retiring as police chief in Miami Beach, Florida, will serve as interim chief and help in the selection of the next police chief, the city announced Wednesday, April 20, 2022. (AP Photo/Wilfredo Lee, File)

DENVER (AP) — The police chief who led police in the Denver suburb of Aurora when a gunman killed 12 people in a movie theater a decade ago is returning to temporarily lead the embattled department following the firing of its last chief.

City manager Jim Twombly said he hired Oates “because he has established trust within our community and many of our officers.”

Earlier this month Twombly fired Police Chief Vanessa Wilson, who was hired in 2020 as Colorado's third-largest city faced scrutiny over the death of Elijah McClain, a case that received widespread attention in the wake of protests of racial injustice and police brutality. McClain died after being stopped by police, put in a chokehold and injected with the powerful sedative ketamine in 2019. Three police officers and two paramedics were indicted in McClain’s death last year.

Wilson acted quickly to fire officers for misconduct, including officers who took and shared photos appearing to mock McClain’s death. Earlier this year, she also fired the president of one of police department’s two police unions for an email he sent to over 200 department employees criticizing diversity provisions the city had agreed to under a consent decree with the state attorney general’s office and disparaging the city’s residents.

Twombly praised Wilson's community outreach but said he fired her because of concerns about her leadership and management of the department without getting into specifics.

Wilson disputed Twombly’s assessment and alleged she was forced out for political reasons. Her lawyers have said the new conservative majority on the city council did not support Wilson’s efforts to enact reforms required by the consent decree following an investigation by the state attorney general’s office prompted by McClain’s death.

Oates, who also has served as police chief in Ann Arbor, Michigan, and a deputy chief in the New York Police Department, said getting officers to support the changes in the agreement will be among his highest priorities.

“It is the only way to move forward as a department,” he said.