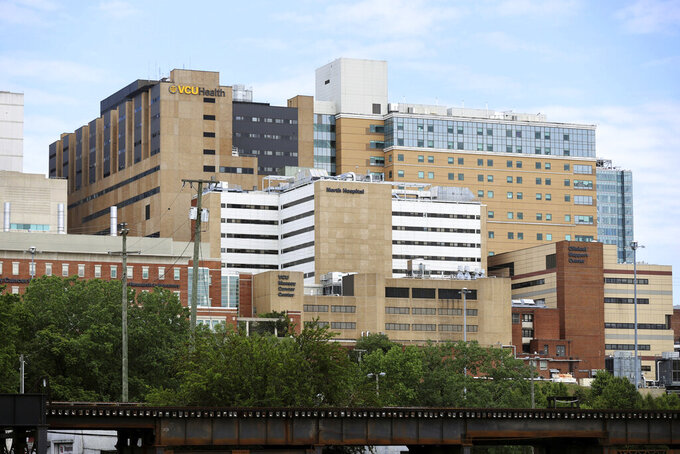 Daniel Sangjib Min, ASSOCIATED PRESS
VCU Health is shown in Richmond, Va., on May 11, 2021. After they were notified their bonuses would be smaller this year, nurses at Virginia Commonwealth University Health, one of the region’s largest employers, threatened to walk out. But the move never materialized. (Daniel Sangjib Min/Richmond Times-Dispatch via AP)

RICHMOND, Va. (AP) — After they were notified their bonuses would be smaller this year, nurses at Virginia Commonwealth University Health, one of the region’s largest employers, threatened to walk out last week. But the move never materialized.

Frustrated with a pandemic that has stretched nearly two years and hospital staffs that are suddenly depleted, medical workers across the country feel bleary. That frustration was compounded last month when VCU Health employees were told their bonuses would be smaller this year.

“There’s a high level of frustration, and all hospitals in the country are short-handed,” said Dr. Art Kellermann, CEO of VCU Health, in an interview.

Last year, most of the system’s employees received appreciation payments of $750, Kellermann said. This year, the payment is closer to $400. The average annual merit increase in 2020 was 3%. This year, employees will get 2%.

VCU Health has roughly 13,000 workers, according to the most recent figures from the health system.

The pandemic has put a crunch on the hospital system’s finances, Kellermann said. Early on, revenues decreased sharply because elective cases were prohibited. And costs increased as the hospital system bought personal protective equipment and medications and hired extra staff. VCU Health also accepted patient transfers that other hospitals turned away.

Unlike other hospitals, Kellermann said, VCU Health never furloughed or laid off its employees. More than 30,000 health care workers in Virginia were laid off near the onset of the pandemic, according to the Virginia Employment Commission.

The hospital’s finances would be in better shape if Anthem and other insurance providers properly reimbursed the health system, he added. Anthem Blue Cross, the country’s second-largest health insurance company, is billions of dollars behind in payments to hospitals and doctors, including VCU, Kaiser Health News reported last month.

With a $3.7 billion budget, VCU Health still has a strong financial position, Kellermann said. While costs have risen dramatically, revenue now is decent.

Roughly 8,100 hospital employees in the U.S. left their jobs in September, according to the Bureau of Labor Statistics.

“Given our role in the state, we can’t go head-to-head with the other two systems that are national organizations with revenue in the billions of dollars,” Kellermann said.

VCU is referred to as a safety net hospital because it treats patients with every ailment, including cancer, serious trauma and burns. HCA is a for-profit system, Bon Secours is nonprofit, and VCU is government-affiliated. “Safety net and rich don’t go in the same sentence.”

VCU Health this year raised its minimum wage from $12 to $15, a move made before the other two systems, Kellermann said. But he acknowledged VCU is still behind Bon Secours and HCA in compensating employees.

Staff circulated a flyer calling for nurses to call in sick on Oct. 25, WTVR-TV reported. There have been two or three calls for staff to not show up for work, Kellermann said, but none was acted upon.

Hospital leadership did not threaten punishment if nurses walked out, he added. He said he respects employees’ rights to express their views and doesn’t take it for granted that they all showed up for work.

“We hear your frustrations and wish we could do more, but the bottom line is that we are doing everything we can within the financial constraints we face,” the administration wrote in its letter.

A Change.org petition calling for fair compensation for nurses has received more than 6,000 signatures; it calls for a 5% cost-of-living wage increase. Inflation has risen 5.4% this year.

“We have stood by VCU, trusting that you would stand by us; now we are burnt out and do not feel valued or supported,” the petition reads.

Despite the financial challenges, VCU is proceeding with three major projects: a 16-story inpatient children’s tower due to open in 2023, a 17-story adult outpatient pavilion scheduled to open in December; and a transition to a new electronic medical record system, Epic, also coming in December.

The two hospital buildings will cost close to $800 million.

The health system has limited employees’ personal time off during the transition to Epic, the hospital’s administration said in a letter to staff this week.

Those plans were hatched before the pandemic and before Kellermann arrived at VCU last fall. But they are decisions that should have been made long ago, he said.

The hospital’s administration continues to discuss how to better compensate its employees, Kellermann said. Hospital leadership met to discuss the issues at 7 a.m. Friday.