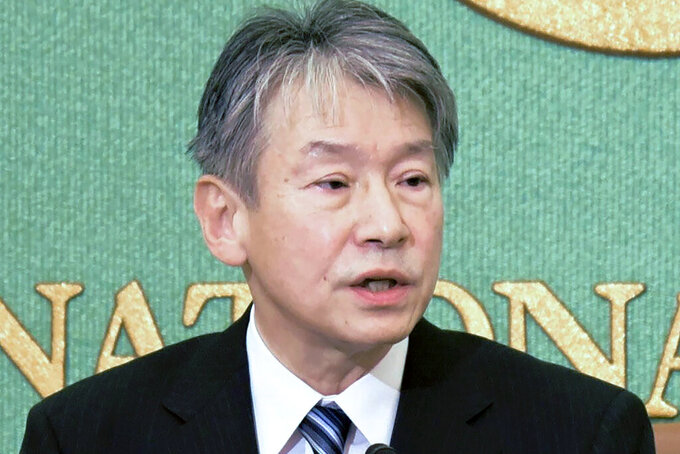 Uncredited, ASSOCIATED PRESS
Nuclear Regulation Authority Commissioner Shinsuke Yamanaka speaks at the Japan National Press Club in Tokyo, Monday Nov. 21, 2022. Japanese nuclear regulators are considering revising a safety evaluation system to allow aging reactors to operate beyond the current 60-year limit, but the move is aimed at preventing safety lapses and is not motivated by government efforts to increase use of nuclear power, the official said Monday.(Kyodo News via AP)

TOKYO (AP) — Japanese nuclear regulators are considering revising a safety evaluation system to allow aging reactors to operate beyond the current 60-year limit, but the move is aimed at preventing safety lapses and is not motivated by government efforts to increase use of nuclear power, an official said Monday.

The Nuclear Regulation Authority Commission, at the request of the Economy and Industry Ministry, has drafted a plan to scrap the 60-year limit and replace it with a system of potential extensions granted every 10 years after 30 years of operation.

That would be a major change from the current 40-year limit with a possible one-time extension of up to 20 years, a rule that was adopted under stricter safety standards set after the 2011 Fukushima nuclear power plant disaster.

The draft plan still has to be formally approved.

The move has prompted mixed reactions from the public. Nuclear Regulation Authority Commissioner Shinsuke Yamanaka denied criticism that the watchdog may have yielded to government pressure to prolong the operational lifespan of reactors.

“Our judgment in our safety inspections is not affected, no matter what the government policy may be,” Yamanaka said. “We have no intention of making any compromise in our strict safety checks.”

Yamanaka stressed that his agency had not initiated the change and was responding to the government’s request in order to ensure safety.

Prime Minister Fumio Kishida said in August that Japan needs to consider all options in its energy mix, including nuclear, to bolster its “green transformation” to curb emissions of greenhouse gases and secure a stable energy supply. Japan has pledged to reach carbon neutrality by 2050.

Anti-nuclear sentiment and safety concerns rose sharply in Japan after the Fukushima disaster, but the government has been pushing for a return to nuclear power amid worries of energy shortages following Russia’s invasion of Ukraine and a global push to reduce greenhouse gases. Japan has faced criticism for saying it will phase out fossil fuel use by 2050 without giving a clear timeline.

While maintaining a 20%-22% target for nuclear energy as part of its energy mix for 2030, Japan’s government previously insisted it was not considering building new nuclear plants or replacing aged reactors, apparently to avoid triggering criticism from a still wary public.

Kishida, in a major shift toward a greater use of nuclear energy, asked a government panel to decide by the end of this year on a proposal for development and construction of “new innovative reactors,” such as small modular nuclear reactors, while also asking nuclear officials and experts to consider extending the operational lifespan of aging reactors.