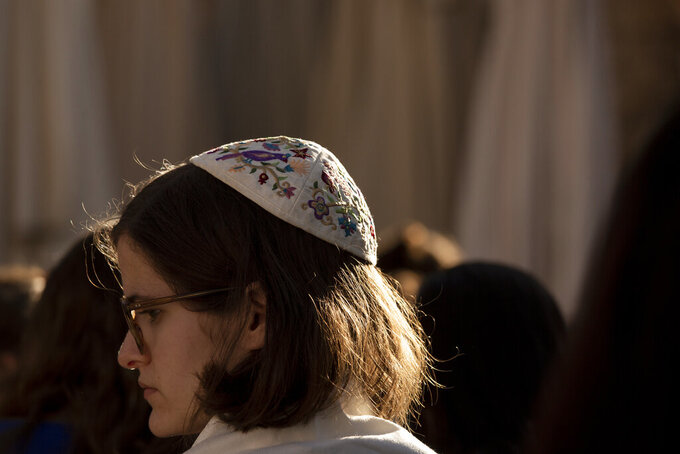 Maya Alleruzzo, ASSOCIATED PRESS
A member of the Women of the Wall wears a head covering in the women's section at the Western Wall, the holiest site where Jews can pray, in the Old City of Jerusalem, Friday, Nov. 5, 2021. Thousands of ultra-Orthodox Jews gathered at the site to protest against the Jewish women's group that holds monthly prayers there in a long-running campaign for gender equality at the site. (AP Photo/Maya Alleruzzo)

JERUSALEM (AP) — Thousands of ultra-Orthodox Jews gathered at the Western Wall in Jerusalem to protest against a Jewish women’s group that holds monthly prayers there in a long-running campaign for gender equality at the site.

For decades the “Women of the Wall” group has campaigned for equality of worship at the wall, one of Judaism's holiest sites. Israel’s religious institutions are dominated by the ultra-Orthodox, who are opposed to any changes at the site, where men and women pray in separate areas.

The dispute has sharpened since the swearing-in of a new government in June pushed Israel's ultra-Orthodox parties into the opposition. A newly elected lawmaker who is also a Reform rabbi has used his parliamentary immunity to bring Torah scrolls into the women's section in defiance of rules enforced by the ultra-Orthodox administrators of the site.

Police set up metal barricades and deployed in large numbers to hold back the mostly male protesters, who blew whistles and occasionally surged forward only to be pushed back. The women carried empty mantles used to cloak Torah scrolls to protest the prohibition on bringing the scrolls themselves into the women's section.

Anat Hoffman, the founder of the group, said they are “fighting for equality and religious pluralism and justice.”

Itamar Ben Gvir, a far-right member of parliament who often makes provocative appearances at Jerusalem protests, approached the barricades with his entourage and argued with one of the women shouting, "don’t harm the Western Wall.” He left minutes later, as supporters of the women replied, “Ben Gvir go home!”

The protests were called for by ultra-Orthodox leaders, including Aryeh Deri, head of the Shas party. In a tweet on Friday that was shared by former Prime Minister Benjamin Netanyahu, Deri called on his supporters to come out “so that heaven forbid this holy place is not desecrated.”

Gilad Kariv, a Reform rabbi and newly elected parliament member from the center-left Labor party, had planned to bring a Torah scroll into the site for the women to use but called off his visit at the request of Israeli President Isaac Herzog, who sought to prevent conflict at the site.

Netanyahu had shelved plans for an egalitarian prayer space at the wall in 2017 under pressure from the ultra-Orthodox parties who are politically allied with him.

The move infuriated adherents of more liberal strains of Judaism to which most Jews in North America adhere. The dispute has been a major point of friction between the two largest Jewish communities in the world, in Israel and the United States.

In Israel, ultra-Orthodox rabbis tightly control Jewish practices including weddings, divorces, and burials, viewing it as their responsibility to preserve traditions that have endured centuries of persecution and assimilation. They continually resist calls for reforms from liberals, often deeming them second-class Jews who ordain women and members of the LGBTQ community and are overly accepting towards converts and interfaith marriages.