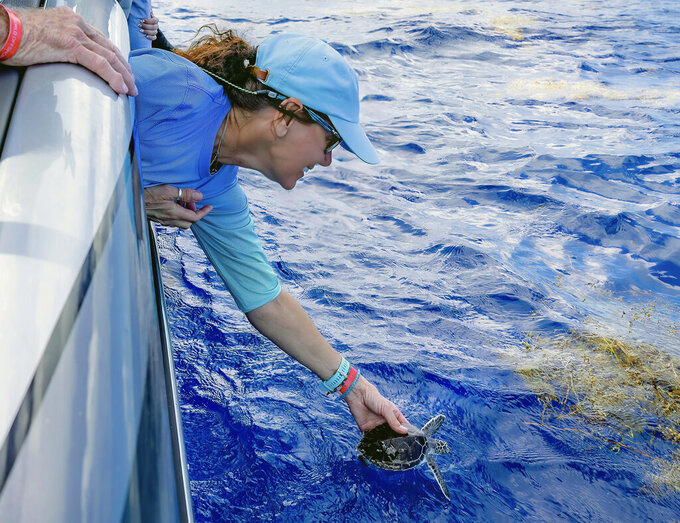 Ray Lee, ASSOCIATED PRESS
In this Saturday, Nov. 12, 2022, photo provided by the Florida Keys News Bureau, Bette Zirkelbach, manager of the Florida Keys-based Turtle Hospital, releases Ian, a rescued juvenile green sea turtle, about 20 miles off Key West, Fla., in the Gulf Stream. The tiny reptile, was named after a family discovered it while cleaning up a boat ramp following Ian's tropical storm-force winds brushing Key West Sept. 29. The hospital treated Ian with fluids, diet and nursed it back to health and released it with several other young turtles. The turtles were transported to the release point by a crew and boat from the Race World Offshore Key West World Championship that ends Sunday, Nov. 13. (Ray Lee/Florida Keys News Bureau via AP)

KEY WEST, Fla. (AP) — A green sea turtle named after Hurricane Ian was among 15 injured sea turtles released in Gulf Stream waters off Key West by staff from a turtle hospital and members of a powerboat racing team vying for the sport’s world championship.

“Ian” was found buried in seaweed by a family cleaning a boat ramp after the storm's tropical storm-force winds brushed Key West on Sept. 29. The tiny turtle was taken to the Turtle Hospital in Marathon, where it was treated with fluids and diet and nursed back to health.

The hospital’s manager, Bette Zirkelbach, said “Ian” and 14 other young sea turtles were released Saturday into a sargassum weed line about 20 miles (32 kilometers) off Key West in the Florida Keys National Marine Sanctuary. Sargassum acts as camouflage for young turtles, making it an ideal habitat for their stage of life.

The turtles were carried to the release point by the TS Motorsports MTI powerboat, a 39-foot (12-meter) vessel participating in the Race World Offshore’s Key West World Championship.

The world’s first veterinary facility of its kind, the Turtle Hospital has been rescuing, rehabilitating and returning turtles to the wild for more than 30 years.