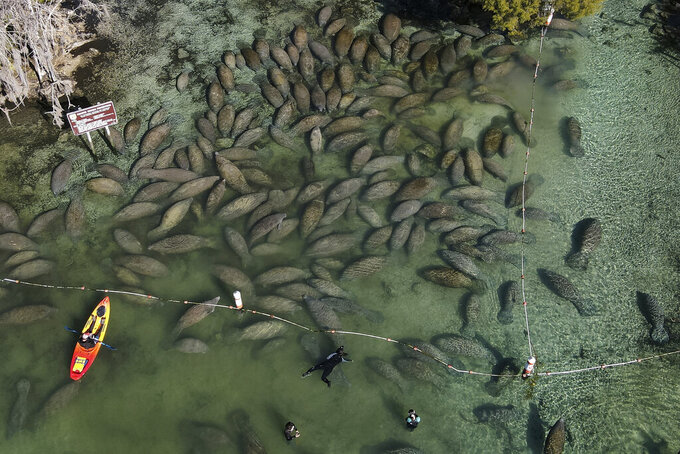 Mike Carlson, ASSOCIATED PRESS
FILE - Snorkelers and kayakers interact with an aggregation of manatees gathered at the entrance to the Three Sisters Springs during a cold morning Sunday, Jan. 30, 2022, in Crystal River, Fla. Rob Hale, a co-owner of the Boston Celtics, is donating $2 million toward protecting the Florida manatees and their habitat following two seasons of record-breaking manatee mortalities in the state. Fox Rock Foundation, a family charity overseen by Hale and his wife, Karen, will give $1 million each to the nonprofits Fish & Wildlife Foundation of Florida and Save the Manatee Club, the groups announced Tuesday, May 17. (AP Photo/Mike Carlson, File)

MIAMI (AP) — A co-owner of the Boston Celtics is donating $2 million toward protecting the Florida manatees and their habitat following two seasons of record-breaking manatee mortalities in the state.

Fox Rock Foundation will give $1 million each to the nonprofits Fish & Wildlife Foundation of Florida and Save the Manatee Club, the groups announced Tuesday. The foundation is a family charity overseen by Celtics co-owner Rob Hale and his wife, Karen. The Hales have a home in Naples.

“Our family feels called to manatee conservation not only because they are intelligent, curious creatures, but also because of the critical role they play in aquatic ecosystems,” Karen Hale said in a statement. “We are proud to partner with both of these incredible organizations that are working tirelessly to protect manatees and improve the health of our oceans and other waterways.”

The Fish & Wildlife Foundation of Florida is using the money to expand current projects to restore the Indian River Lagoon's overall health by replanting eight acres of vegetation at six sites in the lagoon with promising water quality, according to news release.

The Save the Manatee Club will use the money to fund a perpetual endowment, supporting projects to preserve, remediate and restore critical manatee habitat for the long and short terms, the group said.

Last year, a record 1,100 manatees died largely from starvation because water pollution from agricultural, septic tank, urban runoff and other sources has diminished their main winter food source along Florida's east coast, especially the Indian River Lagoon that stretches from Cape Canaveral to the south.

So far this year, Florida officials have confirmed more than 500 manatee deaths, compared with more than 700 last year at this same time. Both are well above the five-year average of about 350 manatee deaths in the time period.

Estimates place the manatee's wild population as low as 7,520, according to the state wildlife commission.

Manatees are gentle round-tailed giants, sometimes known as sea cows, and weigh as much as 1,200 pounds (550 kilograms) and live as long as 65 years or so. Manatees are Florida’s official state marine mammal and are closely related to elephants.

Officials ask anyone who sees a distressed or dying manatee to call the FWC hotline at 888-404-3922.