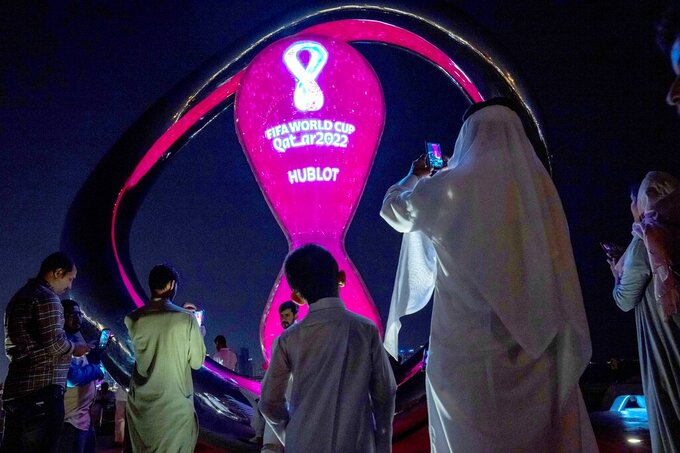 DUBAI, United Arab Emirates (AP) — Hosting the World Cup marks a pinnacle in Qatar's efforts to rise out of the shadow of its larger neighbors in the wider Middle East, where its politics and its upstart ambitions have brought both international attention and regional ire.

The road to the tournament — and Qatar's increased prominence on the global stage — has been fueled by the country becoming one of the top exporters of natural gas. That newfound wealth built the stadiums that fans will fill for the tournament, created the Arab world's most recognized news network, Al Jazeera, and enabled Doha's diplomatic outreach to the wider world.

But that rise has not been without intrigue. A palace coup in 1995 installed a more assertive ruler in the country, who used Qatar's wealth to back the Islamists who emerged stronger amid the 2011 Arab Spring protests — the same figures his fellow Gulf Arab leaders viewed as threats to their rule. A yearslong boycott of Qatar by four Arab nations that began in 2017 nearly sparked a war.

And while the overt tensions have eased in the region, Qatar likely hopes the World Cup will serve to boost its standing as it balances its relations abroad to hedge against any danger to the country in the future.

“They know there are these potential threats; they know they are very vulnerable,” said Gerd Nonneman, a professor of international relations and Gulf Arab studies at Georgetown University in Qatar. “Anything they can do to have an international network of if not allies, at least a sympathetic element, they will.”

Qatar, a little larger than Jamaica or just smaller than the U.S. state of Connecticut, is a peninsular nation that sticks out into the Persian Gulf like a thumb. It shares just a 60-kilometers (37-mile) border with Saudi Arabia, a nation 185 times larger, and sits just across the Gulf from Iran.

Through its sovereign wealth fund, Qatar owns London's famed Harrods department store, Paris Saint-Germain soccer club and billions of dollars in real estate in New York City. That wealth comes from its sales of liquified natural gas through an offshore field it shares with Iran, most of it going to Asian nations such as China, India, Japan and South Korea.

That spigot of wealth began flowing in 1997, just after two major events that shook Qatar. The first, Iraq's invasion of Kuwait in 1990 and the subsequent 1991 Gulf War, saw Doha and other Gulf Arab nations realize the need for long-term American military presence as a hedge, said Kristian Ulrichsen, a research fellow at Rice University's Baker Institute.

Qatar built its massive Al-Udeid Air Base, which is home to some 8,000 American troops and the forward headquarters of the U.S. military's Central Command today.

The second event that shook Qatar took place in 1995, when Sheikh Hamad bin Khalifa Al Thani seized power in a bloodless coup from his father who was in Switzerland. Sheikh Hamad later put down a 1996 coup attempt by his cousin.

Under Sheikh Hamad and flush with cash, Qatar created Al Jazeera, the satellite news channel that became known worldwide for airing statements from al-Qaida leader Osama bin Laden. The U.S. railed against the channel after the American-led invasion of Iraq in 2003, though it provided the Arab world something beyond tepid state-controlled television for the first time.

In December 2010, Qatar won its bid to host the 2022 FIFA World Cup. Just two weeks later, a Tunisian fruit seller set himself on fire in protest and ultimately died of his burns — lighting the fuse for what became the 2011 Arab Spring.

For Qatar, it marked a crucial moment. The country double-downed on its support of Islamists across the region, including Mohammed Morsi of the Muslim Brotherhood who would be elected president in Egypt after the fall of the longtime autocrat Hosni Mubarak. Doha poured money into Syrian groups opposing the rule of Bashar Assad — with some funding going to those that America later described as extremists, like the Islamic State group.

Qatar long has denied funding extremists, though it does maintain relations with the Palestinian militant group Hamas that rules the Gaza Strip, working as an interlocutor with Israel. But analysts say there was a recognition that things may have moved too fast.

“They realize they stuck out their necks too far too soon … and they began to re-calibrate that,” Nonneman said.

The Arab Spring soon chilled into a winter. A counterrevolution in Egypt supported by other Gulf Arab states saw the installation of military general turned President Abdel Fattah el-Sisi in July 2013.

A little over a week earlier, Sheikh Tamim bin Hamad Al Thani, Sheikh Hamad's son, took over as ruler in Qatar in the ruling family's own acknowledgment that a generational change was needed.

Gulf Arab countries, however, remained angry. A 2014 dispute over Qatar's support of Islamists saw Bahrain, Saudi Arabia and the United Arab Emirates withdraw their ambassadors — only to bring them back eight months later.

But in 2017 after then-President Donald Trump's visit to Saudi Arabia, those three nations and Egypt began a yearslong boycott of Qatar, closing off air traffic and severing economic ties even as construction on the stadiums continued.

Things grew so tense that Kuwait's late ruler, Sheikh Sabah Al Ahmad Al Sabah, who at the time mediated the dispute, suggested that “military action” at one point was a possibility, without elaborating.

The dispute ended as President Joe Biden stood poised to take office, though regional tensions remain. Still, Qatar has found itself hosting negotiations between American officials and the Taliban, as well as assisting the U.S. withdrawal from Afghanistan. Russia's war on Ukraine has seen European leaders come to Doha, hopeful for additional natural gas.

“They are at the center of attention again,” Ulrichsen said. “It gives them a seat at the table when there’s decisions being taken.”