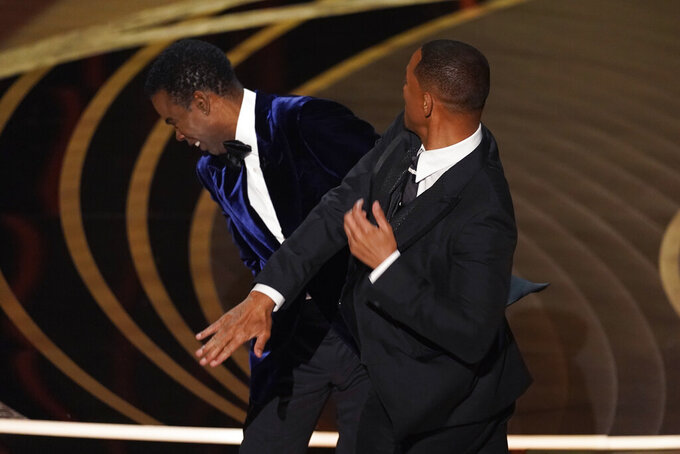 Chris Pizzello, Chris Pizzello/Invision/AP
FILE - Will Smith, right, hits presenter Chris Rock on stage while presenting the award for best documentary feature at the Oscars on Sunday, March 27, 2022, at the Dolby Theatre in Los Angeles. On Friday, April 1, The Associated Press reported on stories circulating online incorrectly claiming a photo shows Rock wearing a pad on his cheek during the incident at the Oscars where Smith slapped him. (AP Photo/Chris Pizzello, File)

CLAIM: A photo shows comedian Chris Rock wearing a pad on his cheek during the incident at the Oscars where Will Smith slapped him.

THE FACTS: Rock was not wearing a pad on his face when he was hit. The photo, which was originally published by Reuters, was manipulated to make it seem as if Rock was wearing a pad on his left cheek. The altered photo circulated widely online following the confrontation at Sunday's 94th Academy Awards, with claims it showed the incident was staged. One Facebook user who shared the altered photo wrote: “Definitely staged, But why ?? Bro gotta whole face pad on his face!!” The original photo was taken for Reuters, Heather Carpenter, a spokesperson for the news agency, confirmed in an email to The Associated Press. An AP review of the original photo and the altered version shows that it has been manipulated. It appears that natural wrinkles on Rock’s face were changed to make it seem as if he was wearing some sort of skin-colored material on his left cheek. Additionally, AP photos of the incident clearly show that Rock was not wearing a pad on his face. Smith walked onstage during the ceremony, slapped Rock, then returned to his seat and yelled expletives at the comedian after he made a joke about Smith's wife, Jada Pinkett Smith, who has a shaved head. Pinkett Smith has spoken publicly about her diagnosis with alopecia, a disease that causes hair loss. Smith went on to win best actor for his role as Richard Williams, father of Venus and Serena, in “King Richard.” Other false claims about the incident have circulated on social media in recent days, including that Rock issued a public apology for his joke, saying he “crossed a line that I shouldn’t have and paid the enormous price of my reputation as a renown comedian.” The apology was fake and didn’t come from Rock, according to his publicist, Leslie Sloane.

‘Edmonton’ firefighter gear in news clip was donated to Ukrainians

CLAIM: A CNN clip showing fires near Lviv, Ukraine, must have been staged or filmed elsewhere because a firefighter in the clip can be seen wearing a jacket labeled for the Canadian city of Edmonton.

THE FACTS: The clip was captured at an oil facility on the northeastern outskirts of Lviv and there’s no merit to claims that it was staged. A Canadian group called Firefighter Aid Ukraine donated the jacket to Ukrainian firefighters in need of equipment, the group’s founder told the AP. The false claims pushed the baseless conspiracy theory that Russia's war on Ukraine is exaggerated or fake by suggesting that the jacket labeled “Edmonton” proved the scene was staged or that the clip was actually captured in Canada. The footage, which aired on CNN on March 26, shows anchor Don Lemon in a helmet and vest reporting from an oil facility near the western Ukrainian city of Lviv that was burning after being hit by Russian air strikes. A firefighter wearing an Edmonton jacket can be seen in the background. “CNN caught faking the news...again,” wrote one Twitter user. But there was a simple explanation for the Edmonton jacket: The gear was donated to Ukrainians by Edmonton firefighters, according to Kevin Royle, a firefighter in Edmonton and the founder of Firefighter Aid Ukraine. “Without a doubt, that equipment did come from us,” Royle said. “That was not a firefighter from Edmonton." Royle said his group has donated thousands of pieces of equipment across the world and in Ukraine, including in Lviv. Canadian mediareports from 2017 covered a trip his group took to Lviv. Landmarks in the CNN clip matched visual features of a location about a 10-minute drive northeast of downtown Lviv, which is where Lemon said he was located in the live shot. AP images captured at the same oil facility the next day also show firefighters working onsite. Emily Kuhn, senior director of communications at CNN Digital Worldwide, confirmed the claims were baseless.

CLAIM: President Joe Biden’s outdoor signing of the Emmett Till Anti-Lynching Act, shown in numerous photographs, could not have happened on Tuesday because the White House South Lawn was completely empty and the weather was freezing cold.

THE FACTS: Associated Press photos prove Biden signed the bill in the White House Rose Garden — not on the South Lawn — on Tuesday, and government records of the bill’s progress show the same. With the stroke of a pen, he made lynching a federal hate crime, signing a proposal into law that, in different forms, had previously failed to pass Congress more than 200 times. As activists rejoiced in a law that they called “a long time coming,” at least one Facebook user cast doubt on the event. “This DID NOT happen yesterday,” the widely circulating post read. “The south lawn of the WH was completely empty, no chairs or anything set up. ABSOLUTELY nothing. Also, it was FREEZING cold yesterday. 30° and extremely windy. I was bundled up and my cheeks were numb after about 15 min. More lies. FAKE NEWS.” Commenters on the post fed into the false theory, with one writing, “People need to wake up to the lies.” Yet Biden’s signing of the bill just after 4 p.m. on Tuesday in the White House Rose Garden was clearly documented in dozens of news reports and in APphotos and video from the ceremony.

COVID-19 vaccines did not cause excess deaths among millennials

CLAIM: There were more than 61,000 excess deaths among the millennial age group in the U.S. in the second half of 2021 because of COVID-19 vaccines.

THE FACTS: There was an increase in excess deaths — which is the difference between the observed numbers of deaths and expected numbers of deaths in a specific period — among millennials at that time, but health experts say there is no evidence vaccines played a role. Social media users pushed the false claim while sharing a video that asserted there was a large number of excess deaths among the “millennial” age group, or people ages 25-44, due to the vaccine in late 2021. Deaths were indeed up in 2021 — provisional mortality data from the Centers for Disease Control and Prevention shows 63,141 more deaths among millennials in 2021 compared to 2019, according to Brian Tsai, a spokesperson for the agency’s National Center for Health Statistics. But experts told the AP that COVID-19 itself is the obvious culprit for the deaths, not the vaccines. The rise coincided with the spread of the highly contagious delta and omicron variants, the experts noted. “I don’t disagree with the fact that the pandemic has been responsible for an enormous number of excess deaths in the US and that adults age 25-44 were deeply affected. But it’s ridiculous to attribute this catastrophe to vaccine mandates and boosters,” Steven Woolf, director emeritus of the Center on Society and Health at Virginia Commonwealth University, said in an email to the AP. Woolf noted that only 65% of the U.S. population was vaccinated at the time. CDC data from December indicated that 2021 was on track to be America’s deadliest year on record, largely due to the COVID-19 pandemic, according to AP reporting. COVID-19 has become the third leading cause of death in the U.S., behind heart disease and cancer. Experts have said drug overdoses also contributed to higher-than-expected death rates in 2021. “If you compare the excess deaths numbers to the total COVID reported death numbers, most of those excess deaths are going to be from COVID itself," Spencer Fox, associate director for the University of Texas’ COVID-19 Modeling Consortium, told the AP. "They’re not there’s not some mysterious thing happening that’s causing these excess deaths.” Reports of death due to the COVID-19 vaccine are extremely rare. The CDC has recorded nine deaths associated with rare blood clots that were caused by the Johnson & Johnson/Janssen vaccine. Currently, 217.2 million people in the U.S. are fully vaccinated. “To date, CDC has not detected any unusual or unexpected patterns for deaths following immunization that would indicate that COVID vaccines are causing or contributing to deaths, outside of the nine confirmed deaths following the Janssen vaccine,” said Martha Sharan, a spokesperson for the CDC.