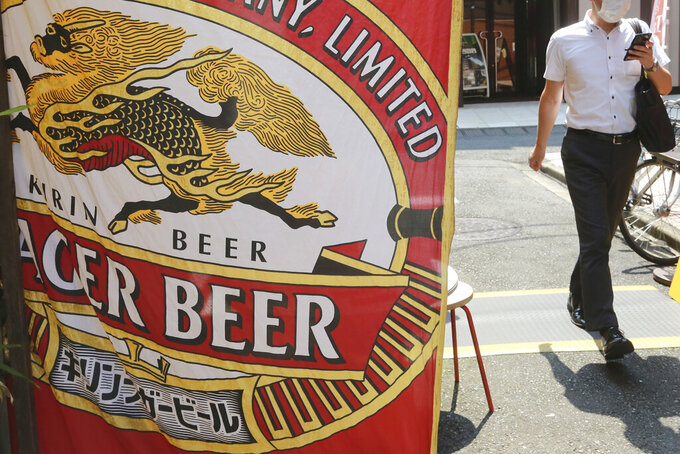 Koji Sasahara, ASSOCIATED PRESS
FILE - A man walks near an advertisement of a Kirin brand beer in Tokyo on Aug. 25, 2020. Kirin Holdings will sell its shares in Myanmar Brewery to the joint venture with Myanma Economic Holdings Plc., the Japanese beverage giant said in a statement Thursday, June 30, 2022. (AP Photo/Koji Sasahara, File)

BANGKOK (AP) — Japanese beverage giant Kirin Holdings plans to transfer its stake in Myanmar Brewery to the joint venture in a share buyback transaction. That will leave its local partner Myanma Economic Holdings Plc. with full control of the company.

Kirin said the share buyback agreement took into account its employees and other stakeholders and would be the fastest way to exit the venture. Human rights groups criticized the move.

Kirin said in an emailed statement that it had “no intention" to give 100% control of Myanmar Brewery to Myanma Economic Holdings, or MEHL, however the deal will leave MEHL as the only shareholder “until it finds its next joint venture partner."

Kirin announced shortly after a military takeover in February 2021 that it intended to pull out of the brewery venture, but reported various problems in reaching an agreement with the local partner on how to withdraw. The latest plan was the best of three options that also included liquidating the brewery or selling its stake to another company, it said.

The transfer of the 51% stake held by Kirin Holdings Singapore Pte, a subsidiary of Kirin Holdings, will give Myanma Economic Holdings full control of Myanmar Brewery. Kirin said it was withdrawing from another venture, Mandalay Brewery, under a similar arrangement.

Human rights advocates have been urging foreign investors to leave ventures in Myanmar to avoid complicity in paying taxes or revenue to entities controlled by the military-led leadership, which faces widespread public opposition to its takeover.

The Assistance Association for Political Prisoners, a private organization that tracks government killings and arrests, says more than 2,000 civilians have been killed by Myanmar’s security forces since the army takeover. The military also is battling anti-government guerrillas in the countryside.

At the same time, sales of stakes in such ventures to state enterprises like MEHL have drawn criticism.

The decision to hand control of Myanmar Brewery and Mandalay Brewery to Myanma Economic Holdings Ltd. is a “windfall for the Myanmar military and will ensure a continued stream of revenue to finance atrocity crimes," Yadanar Maung of the group Justice for Myanmar said in a statement.

“The responsible move is to deny funds to the Myanmar military and remedy negative impacts to workers through compensation," the statement said.

The deal requires approval by the Myanmar government. Estimates of the loss and income from the share transfer were still subject to change, Kirin said.