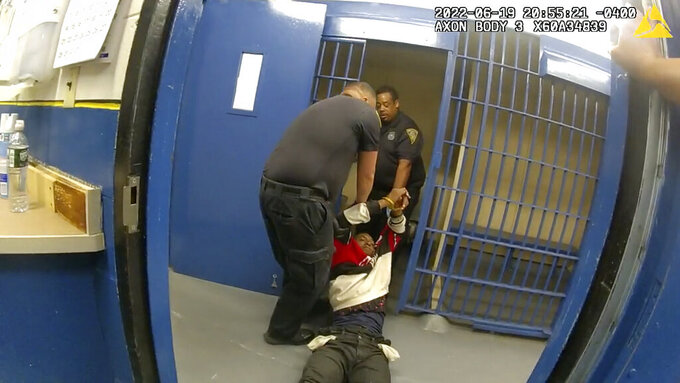 Uncredited, ASSOCIATED PRESS
In this frame taken from police body camera video, Richard Cox, center, is dragged into a cell after being pulled from the back of a police van after being detained by New Haven Police, June 19, 2022, in New Haven, Conn. Officials in Connecticut said, Wednesday, June 22, 2022, that two New Haven officers have been placed on paid leave and three others were reassigned after Cox was seriously injured in the back of a police van. (New Haven Police via AP)

NEW HAVEN, Conn. (AP) — Three additional police officers in Connecticut have been placed on paid leave after a man was seriously injured in the back of a police transport van when one of the officers said he braked to avoid an accident, New Haven authorities announced.

The man, Richard Cox, 36, was later dragged into a police holding cell before being taken to a hospital with signs of paralysis, authorities said. Two other New Haven Police officers were placed on paid leave Tuesday.

Acting Police Chief Regina Rush-Kittle said Thursday the three additional officers had been assigned to work Sunday in the New Haven Police detention facility where Cox was taken after being arrested on a gun charge.

“While the Connecticut State Police continues to take the lead on the investigation of the incident involving Mr. Richard Cox, after careful consideration of the video footage I saw, I have made the determination that all of the officers involved in the transport and handling of Mr. Cox when he arrived at our detention facility should be placed on administrative leave for potential breaches of police protocol,” said Rush-Kittle, in a written statement. She called the handling of Cox “unacceptable.”

Cox, who is Black, was handcuffed when he was in the back of the New Haven police van. There were no seat belts. He flew headfirst into a wall when Officer Oscar Diaz said he braked hard to avoid a collision, police said. A camera recorded the moments when Cox was injured and that video has been released publicly.

Diaz then resumed driving to the police department despite Cox calling for help and saying he was injured and couldn’t move, according to the video and officials. A few minutes later, Diaz stopped the van to check on Cox, who was lying motionless on the floor.

Diaz then called paramedics, but told them to meet him at the station instead of waiting for them, New Haven Assistant Police Chief Karl Jacobson said on Tuesday.

At the station, officers dragged Cox out of the van by his feet and put him in a wheelchair, video shows. Police then booked Cox, took him out of the wheelchair and dragged him into a cell, where he was left on the floor, video shows.

Mayor Justin Elicker said in a public statement issued Thursday that he was concerned the actions of the officers “do not reflect the high standards to which I know other police officers hold themselves to everyday.”

Meanwhile, he said New Haven prisoner transport vans not equipped with seatbelts have been taken out of service and the police department is working to install seatbelts in vans that don't have them.

“While the state does not require seatbelts in local police conveyance vans, the city will require them moving forward,” he said.