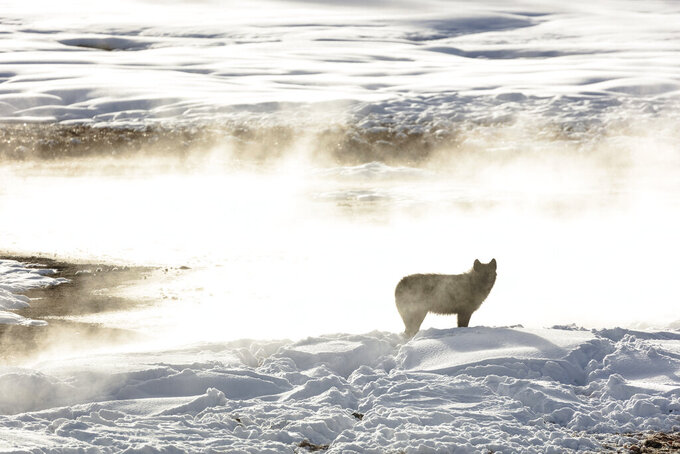 HELENA, Mont. (AP) — A Montana judge said he would decide Tuesday whether to continue temporary limits he placed on wolf hunting or to restore quotas and hunting methods pending a trial over changes in the way the state estimates the size of the wolf population, which informs hunting quotas.

Monday's court hearing in Helena comes as Montana and other Republican-led states have moved in recent years to make it easier to kill the predators. Montana's loosened wolf-hunting rules drew sharp criticism after 23 wolves from Yellowstone National Park were killed last winter, including 19 by hunters and trappers in Montana.

Environmental groups sued the state in October over its regulations for this season, which authorized the killing of 456 wolves statewide — almost 40% of the estimated population — including a new quota of just six wolves north of Yellowstone.

The state's current population estimation method overestimates the number of wolves in the state, leading the state to allow hunters to kill a larger number of wolves, said Francisco Santiago-Avila, a science and conservation manager with Project Coyote, one of the plaintiffs along with WildEarth Guardians. He also argued higher quotas lead to more poaching that is not accurately accounted for in population models.

The environmental groups also argue the state hasn’t updated its wolf conservation plan to include recent data and scientific studies and did not adequately take into consideration public comment urging decreased wolf hunting this season.

Sarah Clerget, chief legal counsel for the Department of Fish, Wildlife and Parks, argued the agency was following a law passed by the 2021 Legislature that said the Wildlife Commission “shall” establish hunting and trapping seasons “with the intent to reduce the wolf population in this state to a sustainable level," while not allowing the population to decline below 15 breeding pairs.

Attorney Jessica Blome said the state’s quota allowing the killing of up to 456 wolves is a threat to the wolf population, which the Department of Fish, Wildlife and Parks estimates is at about 1,160.

Quentin Kujala, the chief of staff for the wildlife agency, said the commission proposed a quota amounting to 40% of the estimated wolf population, which they believed would lead to the legislative-mandated decrease in the number of wolves in Montana even after new litters of pups are born in the spring. He also said poaching numbers — which he said were in the single digits each year — are taken into account when estimating the wolf population.

Abbott on Nov. 16 granted a temporary restraining order limiting wolf hunting to just two animals outside Yellowstone and temporarily reducing the number of wolves a person may kill during the season from 20 to five. He also limited the number that could be killed near Glacier National Park and temporarily banned the use of neck snares during the trapping season that began Monday.

His temporary order expires on Tuesday.

Blome argued the plaintiffs presented adequate evidence to justify a permanent injunction blocking some of the state's hunting rules.

“A threat to 40% of the population is enough," she said, adding that the plaintiffs believe killing even one wolf causes irreparable harm.

In her closing remarks, Clerget said wolf killing doesn't rise to the level of irreparable harm unless it affects the population as a whole.

As of Monday, Montana hunters had killed 69 wolves since the season opened in September.

A total of 273 wolves were reported killed in Montana last winter, out of an estimated population of about 1,100 wolves. The statewide quota had been 450 last season.

Yellowstone National Park Superintendent Cam Sholly last winter asked Republican Gov. Greg Gianforte to halt wolf hunting just outside the park after nearly two dozen park wolves were killed by hunters, mostly in Montana. Gianforte argued at the time — and the state continues to argue in its response to the lawsuit — that if the wolves leave Yellowstone and enter Montana, they can be hunted under state law.

Gianforte trapped and killed a radio-collared wolf from Yellowstone last year on private land near the park. He was later given a warning for violating state hunting regulations by failing to take a mandatory trapper education course before killing the wolf.

Gianforte has criticized the judge, saying Abbott “overstepped his bounds to align with extreme activists” when he granted the restraining order.

Wolves were exterminated in most of the U.S. by the 1930s under government-sponsored poisoning and trapping campaigns. They were reintroduced from Canada into the northern U.S. Rockies in the 1990s and have rebounded in areas of the Great Lakes.

The mountains and forests of Idaho, Montana and Wyoming have become strongholds for wolf populations since reintroduction, which has helped fuel the species’ expansion in recent years into parts of Oregon, Washington state and California.

The animals were taken off the federal endangered species list in the region in 2011.

Montana and Idaho loosened their wolf-hunting rules at the urging of hunters and ranchers who wanted fewer wolves roaming.

Advocates last year petitioned the U.S. Fish and Wildlife Service to restore endangered protections for wolves in the Western U.S. The Biden administration said in a preliminary finding last September that protections for wolves may need to be restored because new laws in Idaho and Montana posed a potential threat to wolves across the region.