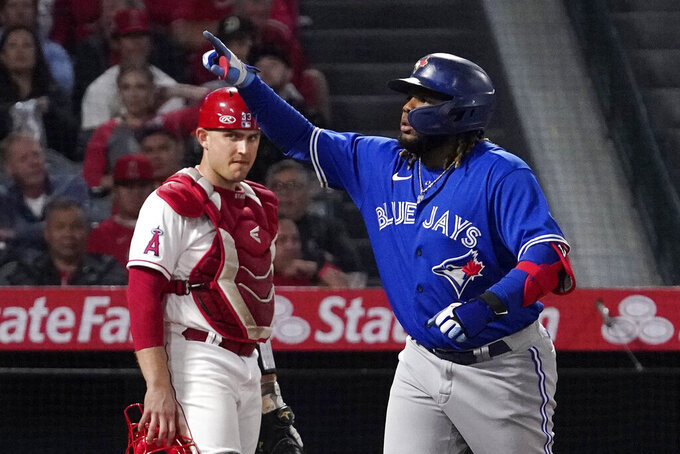 That's one career homer off Ohtani by his top rival for last season's AL MVP award. A few innings later, Guerrero's Blue Jays also had their first win over the Angels' two-way star.

Ohtani (3-3) struck out 10 while yielding five runs over six innings despite pitching with back pain from the first inning onward. He fell behind 5-2 in the sixth on a drive off the left field pole by Guerrero, who finished right behind the Angels' two-way star in the 2021 AL MVP voting.

“They have a really stacked lineup from top to bottom,” Ohtani said through a translator. “Like that last homer I gave up (to Guerrero), I just can’t make those mistake pitches against good hitters, or that’s going to be the result.”

Guerrero didn't speak to the media afterward, but his fellow Blue Jays knew the moment was exciting for the young slugger.

“I think it means (something to) anybody who faces Ohtani,” Toronto manager Charlie Montoyo said. “He’s one of the best players in baseball. Anytime you can do something like that, it’s fun. It has to mean something.”

Ohtani felt a twinge in his back on a first-inning pitch, and he felt it might have been caused by a mechanical mistake. Angels manager Joe Maddon said he'll see how Ohtani feels Friday before deciding whether to ask him to take a day off as LA's designated hitter.

Toronto hit the ball hard early and often against Ohtani, who beat the Blue Jays last summer in his only previous mound meeting. Ohtani’s velocity was down, and his fastball spin rate was down to 2,129 RPM after he averaged 2,429 coming in.

Toronto put nine balls in play with exit velocities over 93 mph. The Blue Jays got six hits against him, and their three-run third was only the third multi-run inning allowed this season by Ohtani.

“I think our approach was great,” Montoyo said. “We made him work. Of course he’s one of the best pitchers in baseball, (but) everybody had good at-bats.”

Bo Bichette hit a two-run double and Santiago Espinal had an RBI single in the third inning for Toronto in the opener of a four-game series at the Big A. Danny Jansen added his third homer in two games in the ninth.

Luis Rengifo had an RBI single for the Angels, who have lost six of nine in their worst stretch of the season to date. Ohtani went 0 for 2 with a walk and an RBI groundout at the plate.

Hyun Jin Ryu (2-0) gave up six hits and two runs over five innings for Toronto before leaving with tightness in his elbow.

“I don't think it's going to be an issue,” Ryu said through a translator. “I just felt it a little bit. I don't think I'm going to miss my next start.”

Springer opened with an eight-pitch at-bat against Ohtani culminating in his 48th leadoff homer, tying Ian Kinsler for the fourth-most in baseball history. The homer also was the former Astros slugger's 17th in his last 33 games against the Halos.

Ryu retired Mike Trout three times to continue his curious dominance in the matchup. The three-time AL MVP is 0 for 13 against the South Korean left-hander — his worst mark against any pitcher he has faced at least 10 times.

After striking out four times Wednesday, Trout went hitless in back-to-back starts for the first time this season.

Ohtani got help in the fourth from left fielder Brandon Marsh, who sprinted to make a nifty leaping catch of Jansen's line drive to the wall.

Blue Jays: Cavan Biggio struck out three times, walked and played first base after returning from Triple-A Buffalo before the game. He had been away from the Jays since late April after testing positive for COVID-19.

Angels: Slugging OF Taylor Ward flied out as a pinch-hitter for Ohtani in the eighth for his first appearance since running into the wall last Friday. Ward won't play in the outfield until at least the weekend. ... Juan Lagares came up to provide Los Angeles with a fourth outfielder in Ward's absence, and reliever Mike Mayers was designated for assignment to make room. Mayers was a bullpen stalwart for the Halos in 2020 and 2021, but he capped his rough start to this season Wednesday by giving up five hits — his most in any appearance since his rookie season in 2016.