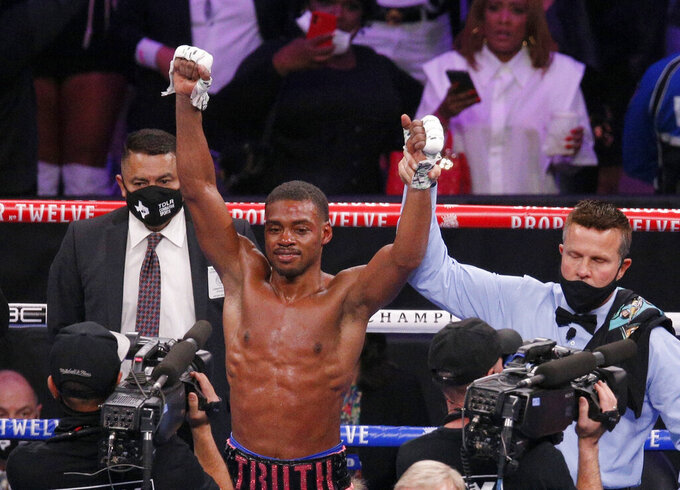 ARLINGTON, Texas (AP) — Errol Spence Jr. returns to the ring in a unification bout against Yordenis Ugás, his replacement in a Manny Pacquiao fight the two-division welterweight champion had to skip because of a torn retina.

Ugás' breakthrough victory against the Filipino star last summer in Las Vegas was supposed to be the second fight for Spence since the WBC and IBF champ escaped serious injury when he wrecked his Ferrari in a high-speed crash.

Now Spence says his left eye has healed, similarly to how he said he was grateful to resume his career against Danny Garcia in December 2020, more than a year after flipping his car in Dallas and getting charged with drunken driving.

The undefeated Spence (27-0, 21 knockouts) won a unanimous decision over Garcia at AT&T Stadium, the site of Saturday night's fight against WBA champ Ugás.

“This layoff was easier for me after the injury than the one after the accident because it was a lot less stress on my body,” Spence said. “Mentally I was also prepared for what I was going to go through. I had been back in training before camp started for this fight, so I’m ready.”

Ugás (27-4) had just 11 days' notice before taking a unanimous decision over Pacquiao last August, retaining the WBA belt he inherited when the organization took it away from Pacquiao. The loss to Ugás sent Pacquiao into retirement at 42.

Spence is preparing for his fourth defense in his hometown, and third at the home of the Dallas Cowboys, the NFL team that adopted the 2012 U.S. Olympian and rising star in the 147-pound class.

A month before the wreck, Spence earned his most notable victory with a thrilling split decision over Shawn Porter in Los Angeles to add the WBC title to the IBF crown he has had since 2017. Now he's fighting for just the second time in 31 months since that win.

“I can’t sit back and fight a tune-up fight right now,” the 32-year-old Spence said. “I want to go straight in with the sharks. Ugás is going to push me to another level and that’s what I want. I knew that if I was fighting a tune-up, I could sneak snacks in at night and stuff like that.”

Next for the winner could be a bout against undefeated WBO welterweight champion Terence Crawford (38-0, 29 knockouts).

Speaking of snacks, Spence said he added a nutritionist he hopes will make a difference. Spence said he struggled to make weight in recent fights, and has gone three bouts without a knockout, the longest stretch of his career.

“I was struggling to make weight and I think that’s the reason that I haven’t gotten a stoppage in my last few fights,” Spence said. “This is the first camp in a while that I haven’t put the sauna suit on.”

Ugás was booked for a bout on the Spence-Pacquiao undercard when Spence's torn retina was discovered during a pre-fight physical. Now the 35-year-old Cuban with an up-and-down career has a shot at holding three belts.