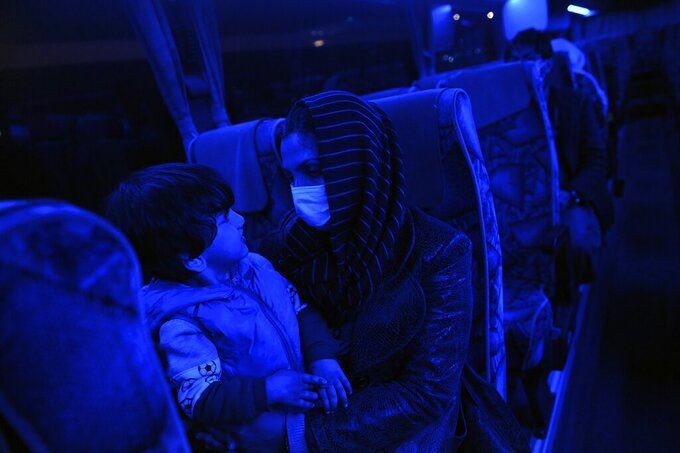 Giannis Papanikos, ASSOCIATED PRESS
An Afghan woman holds a boy as they sit inside a bus after their arrival at the airport of Thessaloniki, northern Greece, Monday, Nov. 22, 2021. The 118 Afghans, who flew from Kabul through Tbilisi, Georgia, are civil servants and private sector executives. They will stay in Greece temporarily before flying on to the U.S. (AP Photo/Giannis Papanikos)

THESSALONIKI, Greece (AP) — More than 100 Afghans believed to have been at risk from the Taliban were granted temporary shelter Monday in Greece after being evacuated on a special flight to the northern city of Thessaloniki.

Greek officials said among the 119 people on board was Afghanistan's former minister of borders and tribal affairs, Mohibullah Samim. Other passengers included a lawyer who had prosecuted suspected Taliban fighters, women's rights activists and a female judge.

The passengers will stay in Greece until they are able to travel on to other countries, including the United States and Canada.

Greece has stepped up security at its eastern border to avoid a repeat of the uncontrolled immigration wave of 2015 — when about a million people heading for more prosperous European countries entered illegally from Turkey. Despite fears, Greece has not seen a big influx of Afghan refugees this fall trying to enter illegally.

Greece has also flown in a group of female Afghan judges and former members of parliament together with their families, about 700 people in all.