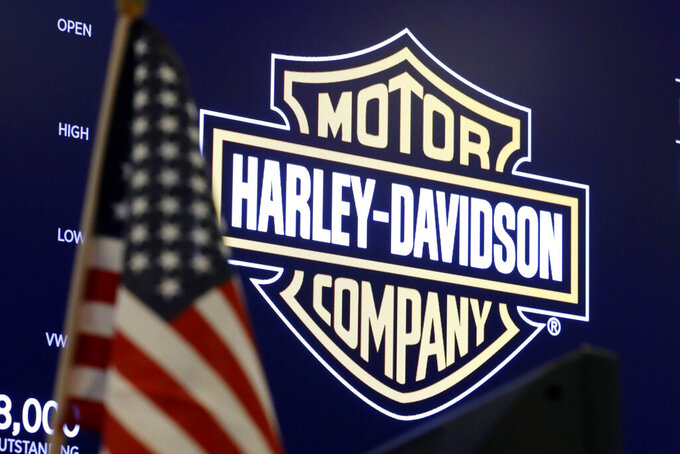 Richard Drew, ASSOCIATED PRESS
FILE - The logo for Harley-Davidson appears above a trading post on the floor of the New York Stock Exchange, March 3, 2020. Harley-Davidson shares fell more than 7% Thursday, May 19, 2022 after the motorcycle maker said it was suspending vehicle assembly and most shipments for two weeks due to a regulatory compliance issue with one of its suppliers. (AP Photo/Richard Drew)

Harley-Davidson announced a two-week suspension of vehicle assembly and most shipments, citing a regulatory compliance issue with one of its suppliers.

The decision was made Wednesday “out of an abundance of caution" after the company received information from a supplier of one of its component parts, Harley-Davidson said. The company did not name the supplier or provide details on the part in question and said the assembly and shipping suspension would not affect its LiveWire electric motorcycle.

The company, like most global manufacturers, was already struggling with supply issues. It reported in April that its profit was trimmed by rising costs and chip shortages, which hurt sales in North America.

Harley-Davidson shares have lost nearly one-third of their value in the past year and Thursday, stock in the Milwaukee company fell $2.76 to $32.97.