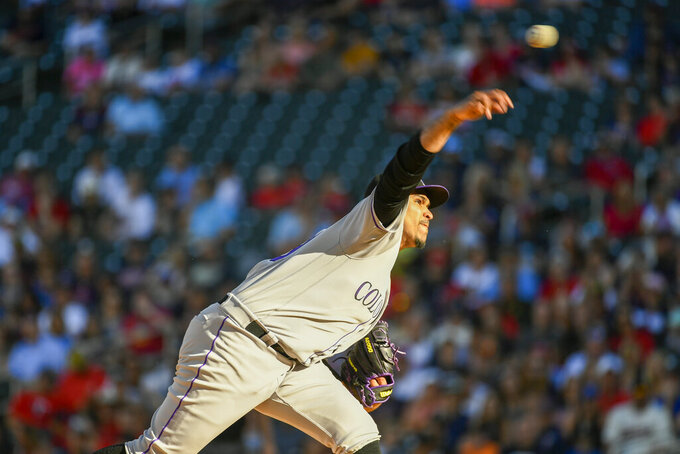 MINNEAPOLIS (AP) — Chris Archer kept his strong June going with five scoreless innings, and three Minnesota Twins relievers closed out a one-hitter in a 6-0 win over the Colorado Rockies on Saturday night.

A day after being shut out themselves, Luis Arraez and the Twins had 10 hits in a dominant victory. Arraez — the big league batting leader — had two hits, Alex Kirilloff drove in three and Byron Buxton marked his return to the lineup with an RBI triple in the first inning.

Archer (2-3) struck out five and walked one while matching a season high in innings — four of which were perfect. In five June starts, the right-hander has allowed four earned runs over 23 innings for a 1.57 ERA working on limited pitch counts.

“I’m super grateful for how Rocco is handling this whole situation,” Archer said of the plan with manager Rocco Baldelli for managing his starts. “It’s proving to be successful. I love playing for him. I love playing for this organization. The training staff does a great job taking care of me as well. I couldn’t be happier with how everything is going.”

Twins pitchers have combined for shutouts in two of the past three games.

Antonio Senzatela (3-4) surrendered four runs on eight hits in five innings for Colorado. The Rockies’ lone hit was a single by C.J. Cron leading off the second.

“The mix kept us off balance,” Colorado manager Bud Black said of Archer. “We had a couple good swings, hit the ball on the nose a few times right at guys. Cronie got the base hit, but he mixed. He pitched, as did their other guys.”

After losing 1-0 to Colorado on Friday, Minnesota jumped on Senzatela quickly.

Arraez led off the first with a double and Buxton followed with a triple to center. He slid into third, got up and pumped his fist, yelling towards the Twins’ dugout.

“It’s like snapping the fingers and you see what he can do, and how he affects everything around him all the time,” Baldelli said. “We’ve had a couple of days, and a few days over the past week or two, where we just haven’t been able to get anything going and yesterday, as well. He just steps to the plate, takes a swing and whacks one in the gap, and then he’s standing at third and he drives a run in. That’s how fast it can happen when he’s out there.”

In Bard’s locker stall in Minnesota, there was a sign with phone numbers to AARP and Life Alert along with a wheelchair nearby.

Rockies: OF Kris Bryant doubled in a game with Triple-A Albuquerque on Friday night, the first hit in 10 at-bats of his rehab assignment. He’s been out since May 22 with a lower back strain.

Twins: OF Trevor Larnach was placed on the 10-day injured list with a core muscle strain. Larnach said he’d been dealing with pain the past few weeks that had gotten worse recently. OF Mark Contreras was recalled from Triple-A St. Paul.