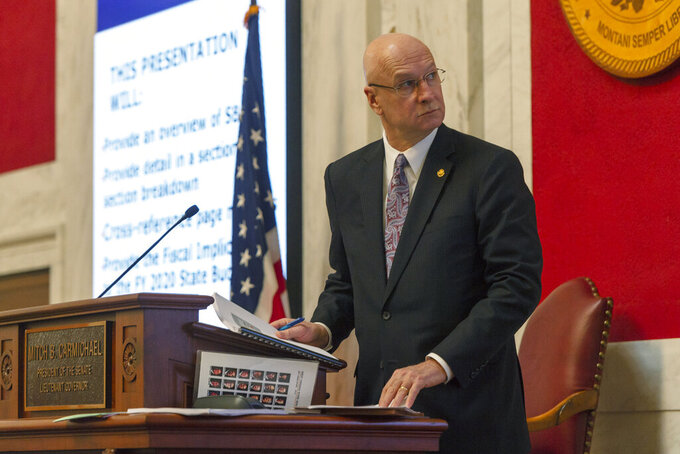 Craig Hudson, ASSOCIATED PRESS
FILE - In this Wednesday, Jan. 30, 2019, file photo, Senate Finance Chairman Craig Blair, R-Berkeley, serves as chairman of the Senate as state senators convene for only the fourth time in state history as a Committee of the Whole to discuss a comprehensive education bill at the Capitol building in Charleston, W.Va. During a floor speech Tuesday, Oct. 19, 2021, West Virginia Republican Senate President Craig Blair compared the U.S. government’s COVID-19 vaccine regulation for companies to Nazi Germany. Mike Pushkin, a Democrat in the House of Delegates who is Jewish, called Blair's remarks irresponsible and offensive. (Craig Hudson/Charleston Gazette-Mail via AP, File)

CHARLESTON, W.Va. (AP) — West Virginia’s Senate president compared the U.S. government’s COVID-19 vaccine regulation for companies to Nazi Germany as the Republican-controlled Senate narrowly passed a bill Tuesday to limit employers in their ability to require workers to be vaccinated against the virus.

The proposal, which would allow certain medical and religious exemptions to company COVID-19 vaccine mandates, was passed 17-16 after more than two hours of debate. One senator was absent. The bill now must be reconciled with a version that earlier passed the House of Delegates.

A separate attempt to make the bill effective from passage failed in the Senate.

Under the bill, a doctor or nurse can provide signed documentation that the employee has a physical condition preventing them from safely receiving the COVID-19 vaccine, or the worker has recovered from COVID-19 and can show they have antibodies for the virus. The worker also can present to their employer a notarized certification for a religious exemption.

The bill covers businesses and state government agencies. Employers would be barred from penalizing or discriminating against current or prospective employees for pursuing the exemptions.

Speaking in favor of the bill, Senate President Craig Blair said he is fully vaccinated against the virus and encourages others to get their shots too but it should be about personal choice.

Turning his attention to the federal government’s upcoming vaccine regulation covering the millions of Americans at companies with 100 or more workers, Blair said, "Frankly, I think this harkens back to Nazi Germany.

“Our federal government is using federal dollars to coerce the citizens in this country to be obedient to the state. Ladies and gentlemen, regardless of whether you’re for us or against us, that’s a problem.”

The comment drew an immediate rebuke from Mike Pushkin, a Democrat in the House of Delegates who is Jewish.

Blair “just compared vaccine work requirements to ‘Nazi Germany’ on the Senate Floor. His remarks are not just irresponsible and offensive, they’re downright stupid,” Pushkin wrote on Twitter. “He just trivialized the murder of millions while minimizing the deaths of hundreds of thousands” during the coronavirus pandemic.

Several physicians who are senators argued against the bill. Marshall County Republican Mike Maroney, a radiologist, called it “the biggest piece of trash I've ever seen.”

“Freedom only goes so far, as long as it doesn’t bleed onto someone else’s freedom,” Takubo said. "Once you've done that, I don’t call it freedom anymore.”

Dozen of businesses, including hospitals, banks and the West Virginia Chamber of Commerce, have told lawmakers they are strongly opposed to the bill.

The West Virginia University Health System, the state’s largest private employer, is requiring its more than 20,000 employees to be fully vaccinated against the coronavirus by Oct. 31. And a Nov. 6 deadline looms for nearly 8,000 employees of Charleston Area Medical Center to provide COVID-19 vaccine documentation.

More than 4,100 people have died from the virus in West Virginia since the start of the pandemic.