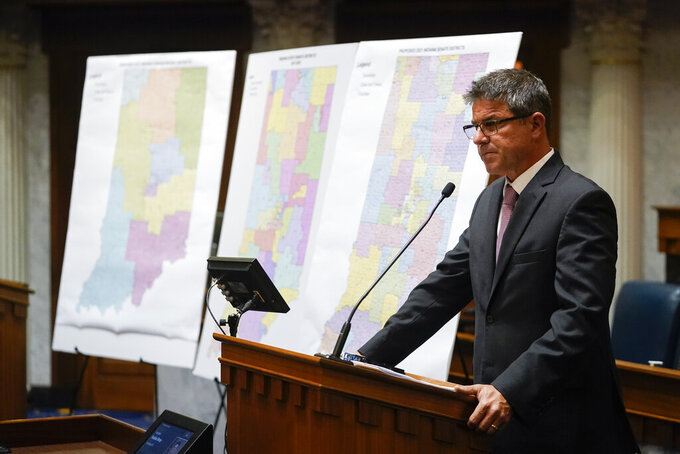 Darron Cummings, ASSOCIATED PRESS
Indiana Senate President Pro Tem Rodric Bray speaks during a news conference at the Statehouse, Tuesday, Sept. 21, 2021, in Indianapolis. The proposal for the new Senate election districts released Tuesday comes as the Republican-dominated Legislature intends to give final approval by the end of next week for all of Indiana's congressional and legislative seats.(AP Photo/Darron Cummings)

The proposal for the new Senate election districts comes as the Republican-dominated Legislature intends to give final approval by the end of next week for new maps covering all of Indiana’s congressional and legislative seats through the 2030 elections.

The redistricting, based on population shifts from last year’s census, creates one new likely Democratic Senate seat in Indianapolis as most rural counties across the state lost population and Indianapolis and its surrounding counties saw about three-quarters of Indiana’s population growth.

But no significant political shifts look likely from the current 39-11 Republican supermajority in the state Senate, which allows Republicans to approve proposals without any Democrats being present. Republicans have had majority control of the Senate since the 1978 elections and a supermajority since the 2010 elections.

Republican Senate leaders said it was a priority to keep more counties and cities in a single district, protecting what they called “communities of interest.”

While the proposed maps add a likely Democratic seat in Indianapolis, more than a half dozen Republican-held districts either extend from Marion County into GOP-leaning suburban areas or reach from predominantly rural districts into the city or suburbs to add population.

“With the movement of the population, again, left rural areas, moved toward more urban and suburban areas,” said Senate President Pro Tem Rodric Bray of Martinsville. “And so a lot of the population flowed toward Indianapolis and the doughnut counties and pulled those Senate districts down there as well.”

An Indiana House committee on Monday endorsed along party lines Republican plans for new congressional and Indiana House districts that political analysts say protect GOP dominance that has given them a 7-2 majority of the state’s U.S. House seats and 71-29 command of the Indiana House.

Longtime Democratic Sen. Tim Lanane of Anderson is one apparent target for Republicans as the new map takes Democratic-leaning Muncie from his district and puts both him and GOP Sen. Mike Gaskill of Pendleton in a new district with a more Republican tilt.

Lanane, a senator since 1997, said it was telling that in the 2011 redistricting Republicans considered it important to create a district with the traditional factory towns of Anderson and Muncie together but not anymore.

“I guess you can create anything and call it a community of interest,” Lanane said.

The new Republican map also draws two Democratic senators — Frank Mrvan of Hammond and Lonnie Randolph of East Chicago — into the same district, while creating an open district in a more suburban and GOP-friendly section of northwestern Indiana’s Lake County.

The redistricting plan also splits Fort Wayne, which has had Democratic mayors since 2000, among four Republican-held Senate districts, three of which extend outside Allen County to take in substantial rural areas. The plan also places the cities of Lafayette and West Lafayette into separate Senate districts that also have large rural areas, rather than keeping together the cities that have elected two Democratic Indiana House members.

Lanane said he saw such moves as diluting the influence of Democratic voters by either “packing” them into overwhelming Democratic districts or “cracking” them up into multiple districts.

“They crack areas so that they can create safe Republican districts,” Lanane said. “That’s part of the pattern we’ve seen in the past.”