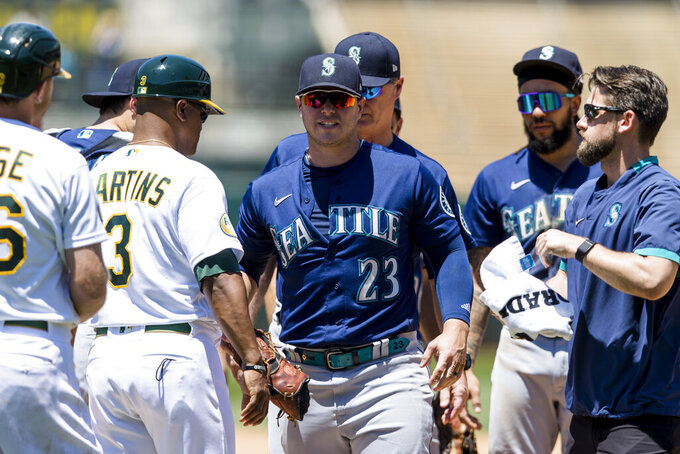 ANAHEIM, Calif. (AP) — The Seattle Mariners will be without another key member of their offense for at least a couple weeks, but considering how bad the injury to first baseman Ty France looked, they consider themselves fortunate.

France was placed on the 10-day injured list Saturday with a left elbow strain. He was involved in a collision during the fifth inning of Thursday's game at Oakland. France was taking the throw at the bag when he collided with Oakland’s Sheldon Neuse.

France had an MRI on Friday that revealed a Grade 2 flexor strain.

“I heard that crack and the first thing I thought was a torn UCL, dislocated elbow or shoulder,” France said before Saturday's game against the Los Angeles Angels. “You think about being out for the rest of the year and needing surgery. A lot of negativity popped into my mind, but the MRI revealed just a strain. It's now about calming down the inflammation.”

France was on track for All-Star Game consideration. He is seventh in the American League with a .316 batting average and is tied for the major-league lead with 25 multihit games. He also has 10 home runs and 45 RBIs and been hit by 14 pitches.

Manager Scott Servais said there are many options to play first in France's absence. Kevin Padlo was in the lineup Saturday after Dylan Moore got the start Friday night. Servais also included Abraham Toro, Luis Torrens and Drew Ellis as others who might get a shot.

Ellis was called up from Triple-A Tacoma to fill France's roster spot.

“It will be matchup based and keep rotating it through I'm not sure how it is all going to play out,” Servais said.