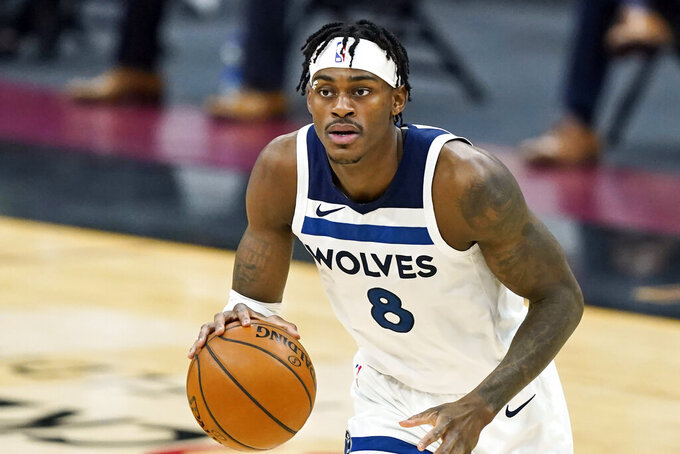 Tony Dejak, ASSOCIATED PRESS
FILE- In this Feb. 1, 2021, file photo, Minnesota Timberwolves' Jarred Vanderbilt drives against the Cleveland Cavaliers in the second half of an NBA basketball game, Monday,, in Cleveland. The Timberwolves have filled out their roster by re-signing Vanderbilt. (AP Photo/Tony Dejak, File)

MINNEAPOLIS (AP) — The Minnesota Timberwolves have filled out their roster by re-signing forward Jarred Vanderbilt and guard Jordan McLaughlin, both of whom were restricted free agents.

The 6-foot-9 Vanderbilt averaged 5.4 points on 60.6% shooting, 5.8 rebounds and 17.8 minutes in 64 games last season, his first full season with Minnesota. Vanderbilt gives the Timberwolves another option at a power forward spot they have been trying to enhance for several years. They also acquired Taurean Prince in a trade last month with Cleveland and return Jaden McDaniels after a promising rookie season.

McLaughlin averaged 5.0 points, 3.8 assists and 18.4 minutes in 51 games last season, his second season with the team. He'll provide depth at point guard behind D'Angelo Russell and Patrick Beverley, who arrived in a trade with Memphis.