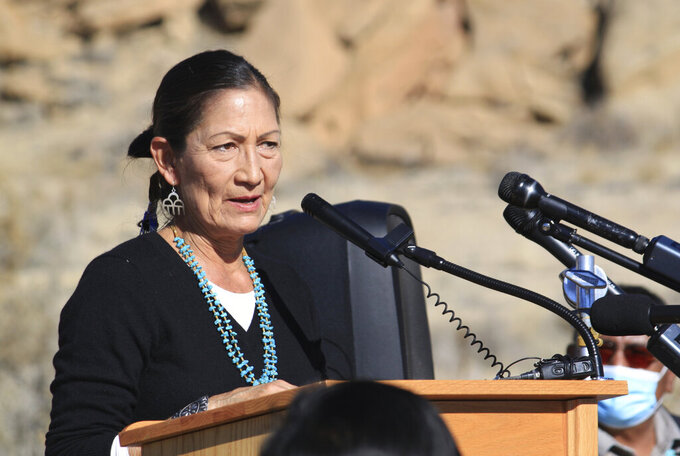 Susan Montoya Bryan, ASSOCIATED PRESS
U.S. Interior Secretary Deb Haaland addresses a crowd during a celebration at Chaco Culture National Historical Park in northwestern New Mexico on Monday, Nov. 22, 2021. Haaland called the day momentous, referring to recent action taken by the Biden administration to begin the process of withdrawing federal land from oil and gas development within a 10-mile radius of the park's boundaries for 20 years. Some Indigenous leaders were elated with the action, saying it marks a step toward permanent protection of the area outside the park. (AP Photo/Susan Montoya Bryan)

SANTA FE, N.M. (AP) — A study commissioned by a coalition of oil and natural gas businesses in New Mexico indicates that state and local governments are more reliant than ever before on the industry to pay for basic public services including public education, amid efforts by elected officials to diversify the economy.

The New Mexico Oil and Gas Association announced study results Wednesday that link $5.3 billion in state and local government income to the petroleum industry during the fiscal year that ended in June, from a variety of taxes, lease purchases, royalties and other fees. That's a half-billion higher than the prior-year estimate.

Association President Leland Gould said in a news release that the oil industry contributions are “great news for teachers and students, critical first responders (to emergencies) and healthcare workers and each and every New Mexican across this state.”

In a counterpoint, about 200 educators urged elected leaders to redouble efforts to diversify the economy and reduce government reliance on the oil and gas sector.

Amid the current windfall, the state of New Mexico is hedging against boom-and-bust cycles of the oil industry with savings accounts and economic development programs ranging from the legalization and taxation of recreational marijuana to rebates to the film industry that can exceed $100 million a year.

In a public letter, the educators also chastised the New Mexico Oil and Gas Association for using teachers and students in publicity campaigns for the industry.

Jennifer St. Clair, a special education teacher at an elementary school in Santa Fe, explained her motivation, noting that public education funding in New Mexico depends on how well the oil and gas industry performs.

“In schools, we’re teaching about climate change and how to mitigate it,” she said. “When we see commercials on TV ... saying, ‘Oh, our teachers are thankful.’ Guess what? We’re not. We don’t want to take all our funding from oil and gas. We want a diverse source.”

New Mexico Oil and Gas Association spokesman Robert McEntyre said the trade group always seeks permission from teachers and students that appear in its publicity. He said the local industry supports “efforts to expand and increase the economic opportunities available to all New Mexicans, just as many of our neighboring states have done alongside a strong oil and natural gas sector.”

A new forecast for state government income is scheduled to be made public Friday by economists for the Legislature and three state agencies.