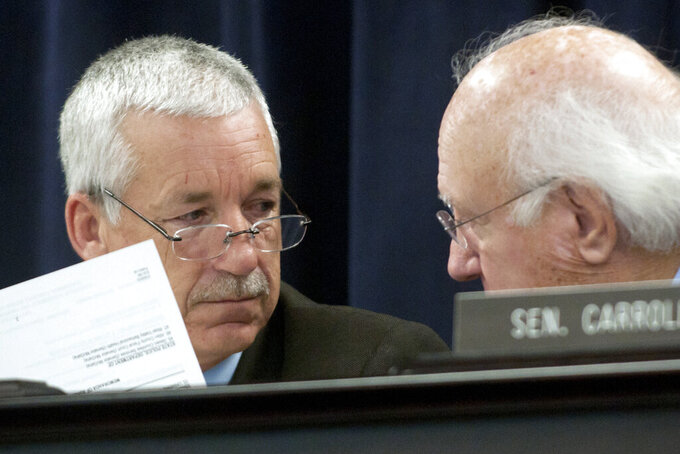 FRANKFORT, Ky. (AP) — Kentucky state Sen. Paul Hornback, a prominent voice on farming as a committee chairman, said Wednesday that he won't seek another term in 2022 but downplayed blistering criticism he received from a fellow Republican, U.S. Rep. Thomas Massie.

Hornback, first elected to the Kentucky Senate in 2010, said he had spent the past couple of months weighing whether to run for reelection. He said he decided against it before the social media attack from Massie on gun issues and farm policy. Hornback, 64, will serve out the remainder of his term but said he opted against another term because he wants to spend more time with his family and on the farm.

“I’m somewhat of a fan of term limits," the Senate Agriculture Committee chairman said in a phone interview. "And I think 12 (years) is about right.”

As for the attack from the congressman, Hornback said: “I kind of disregard Massie. He’s what’s wrong with Washington. He never comes up with any answers. He just says ‘no, no, no.’” He referred to Massie as being from the ”far right."

In his blistering attack late Tuesday, Massie said it was time for Hornback to “pack his bags.” Massie said Hornback “claims to be a Republican but openly advocates for gun control (e.g. red flag laws), opposes every bill that would help small farmers (but supports big Ag subsidies for his farm).”

Hornback said the criticism showed Massie’s “lack of knowledge” about his efforts to support Kentucky agriculture and his conservative voting record in the Kentucky Senate. It reflected everything that’s wrong with social media, the state lawmaker said.

“Because you can go on there just like he did, and say anything you want to say, never have to face the person," Hornback said. "And that’s what starts a lot of trouble.”

Hornback, who describes himself as a strong gun-rights supporter, has promoted legislation meant to temporarily keep guns away from people deemed as threats to themselves or others.

“It’s not about taking people’s guns away," Hornback said Wednesday. "It’s about, we have a problem with gun violence. And that’s more evident than ever right now because of all the mass shootings. That’s a societal problem. And if we as leaders all over the nation, if we don’t discuss it and talk about it, then we never get anything accomplished.”

Hornback has long been an influential voice in Kentucky agriculture, including such key issues as the tobacco buyout and immigration matters linked to workforce challenges faced by many farmers. The tobacco buyout passed years ago by Congress compensated U.S. tobacco growers and others for losing production quotas when the government’s price-support program ended.

As for his legislative record, Hornback pointed to his role in putting Kentucky at the forefront in promoting hemp as a legal agricultural commodity and in restructuring several agricultural boards.