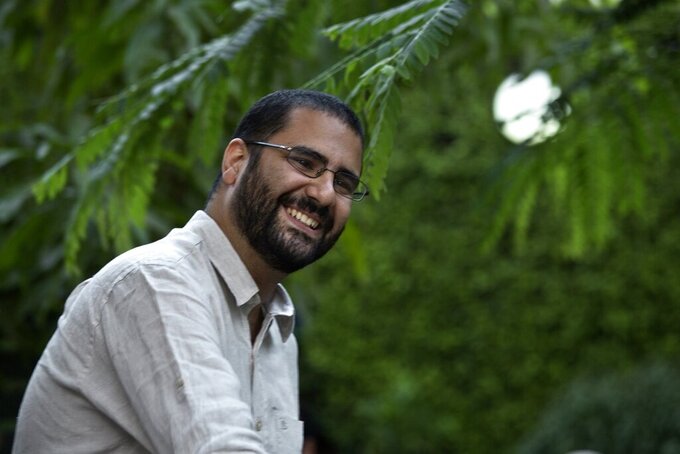 Nariman El-Mofty, ASSOCIATED PRESS
FILE - In this Monday, Sept. 22, 2014 photo, Egypt's most prominent activist Alaa Abdel-Fattah greets people prior to a conference held at the American University in Cairo, near Tahrir Square, Egypt. The family of the imprisoned Egyptian activist says they received a letter from him on Tuesday, Nov. 15, 2022, saying he has ended his hunger strike. The family said in a statement that Abdel-Fattah's mother, Laila Soueif, received a short note in her son’s handwriting via prison authorities. The letter is dated Monday. In it, he asks her to come for monthly visit to him in prison on Thursday. (AP Photo/Nariman El-Mofty, File)

CAIRO (AP) — The family of imprisoned Egyptian activist Alaa Abdel-Fattah said Tuesday they received a letter from him saying he has ended his hunger strike.

In a statement, the family said that Abdel-Fattah’s mother, Laila Soueif, received a short note in her son’s handwriting via prison authorities. The letter is dated Monday. In it, he asks her to come for her monthly visit to him in prison on Thursday.

‘‘I’ve broken my strike. I’ll explain everything on Thursday,’’ the letter read. The circumstances under which he wrote the letter were not clear. The activist had previously said he was willing to die in his strike if not freed.

The family has not seen Abdel-Fattah since the last pre-allotted visit on Oct. 24 and has not been given information on his condition. In the note, Abdel-Fattah asks his mother to bring a cake to celebrate his 41st birthday, which is on Friday. The meetings, conducted behind a glass barrier, usually last for around 20 minutes.

“To me, it's an indication that he means to assure me that he's feeling alright,” Soueif told The Associated Press, referring to her son's reference to his birthday. “I'm not reassured about anything else and I won't be until I see him, and understand how this came about."

His mother also said she does not believe her son was forced to write the letter, as authorities have tried to dictate the contents of his letters previously and he refused.

Fears had been mounting over Abdel-Fattah's life since he stopped intake of all food, then stopped drinking water on Nov. 6, escalating a months-long partial hunger strike to pressure for his release. His strike was timed to coincide Egypt’s hosting of the international climate summit, known as COP27, to draw attention to his case and those of other political prisoners. His partial hunger strike began on April 2, after which he was consuming only 100 calories a day.

The news comes a day after the renowned dissident announced the end of his water strike via a similar handwritten letter delivered to the family.

“I feel cautiously relieved now knowing that at least he’s not on hunger strike but my heart won’t really be settled until Thursday,’’ his sister Mona Seif said in the family's statement.

Abdel-Fattah is one of Egypt’s most prominent pro-democracy activists and has spent most of the last decade in prison. He is currently serving a five-year sentence on charges related to sharing a Facebook post. He rose to prominence during the 2011 pro-democracy uprisings — known as the Arab Spring — that swept through the Middle East. In Egypt, the uprising toppled the country’s long-time autocratic President Hosni Mubarak.

His hunger strike has drawn attention to Egypt’s heavy suppression of speech and political activity. Since 2013, Egyptian President Abdel-Fattah el-Sissi’s government has cracked down hard on dissidents and critics, jailing thousand and virtually banning all protests.

During the two-week climate conference, U.S. President Joe Biden, British Prime Minister Rishi Sunak, French President Emmanuel Macron and German Chancellor Olaf Scholz all raised the activist’s case in their private talks with el-Sissi. Abdel-Fattah gained British citizenship earlier this year through his mother, who was born in London. The family have frequently criticized the British government for not doing enough to secure his release.

But the ending of the hunger strike, which was a surprise to his family, also raised questions over whether Abdel-Fattah had been told something by authorities.

At the conference, Egypt’s foreign minister, Sameh Shoukry, has played down the global attention surrounding Abdel-Fattah’s deteriorating health. Shoukry, the president of the conference, said Saturday that the priority of the summit should be focused on “the existential challenge related to climate change.’’

Also on Tuesday, Tarik el-Awady, a member of Egypt’s presidential pardon committee, announced the release of the 30 pre-trial detainees before posting pictures of several of the freed inmates on his Facebook account. El-Awady did not disclose the identity of any of the detainees.

In recent months, the Egyptian government has sought to improve its international image through mass prisoner releases via presidential pardons and its establishment of a new “strategy” to upgrade the country’s human rights conditions.

A number of human rights groups have cast doubt on these measures and accused Egypt of using the gathering in Sharm el-Sheikh to further whitewash its poor rights record. Egypt is among the world’s worst jailers of journalists, along with Turkey and China, according to 2021 data produced by the U.S.-based Committee to Protect Journalists. Human Rights Watch estimated in 2019 that as many as 60,000 political prisoners are incarcerated in Egyptian prisons, many without trial.

On Saturday, Sanaa Seif, another of Abdel-Fattah’s sisters, took part in a protest march in Sharm el Sheikh that saw hundreds of activists demand action on climate change, human and gender rights. The protesters called for the release of Abdel-Fattah and all political prisoners detained in Egypt. Sanaa, who has been imprisoned in Egypt before and now lives in London, flew to the conference to raise awareness about her brother's case.

‘‘We’re counting down the days until Thursday,’’ said Sanaa, in the family’s statement published on Tuesday.