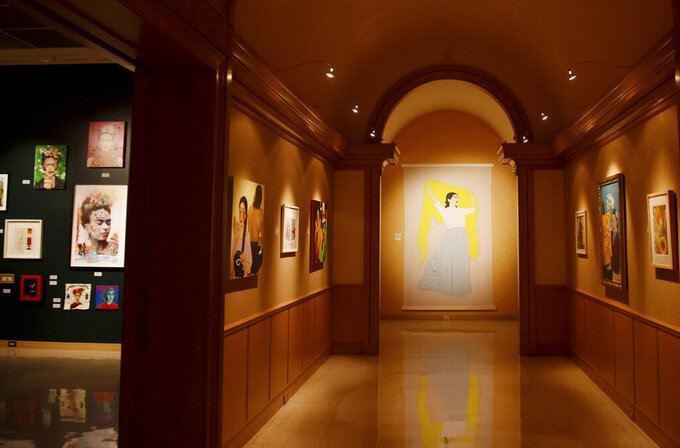 Henrietta Wildsmith, ASSOCIATED PRESS
This Sept. 21, 2021 photo shows The R.W. Norton Art Gallery that will exhibit The World of Frida which celebrates the culture, style, and persona of visionary Mexican painter Frida Kahlo in Shreveport, La. This exhibition is comprised of 95 international artists who have reinterpreted Kahlo’s life in an array of media that honors everything from her self-portraits to depicting her love affairs with Diego Rivera, and recognizes her emotional, physical, professional and societal struggles. (Henrietta Wildsmith/The Shreveport Times via AP) 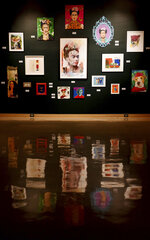 SHREVEPORT, La. (AP) — Walking down the recently waxed floors of the R.W. Norton Art Gallery, the eyes are drawn to the vibrant blue and yellow embroidered piece that elegantly hangs at the end of the corridor.

Kahlo passionately embraced indigenous Mexican traditions and adorned herself with ornate jewelry, flowers, textures, and bright colors, and her influences are on full display in “The World of Frida,” a new exhibition at the gallery.

“This is a big deal the exhibit coming through, this is definitely one of those that speaks to everybody,” Emily Feazel, Norton Art Gallery Designer said. “Being able to come in and see so many artists depicting her, their way is very special.”

This exhibition is comprised of 95 international artists who have reinterpreted Kahlo’s life in an array of media that honors everything from her self-portraits to depicting her love affairs with Diego Rivera, and recognizes her emotional, physical, professional and societal struggles.

The exhibition is an incredible tribute to an artist who continues to influence millions by the simple fact that she always remained true to herself, no matter the cost.

“Everybody knows Frida Kahlo,” Feazel said, but if you are not familiar with her work, this exhibition is a good entry point.

Kahlo was born in 1907, in Mexico City, to two photographers and her life began perilously.

As a child, Kahlo was stricken with polio and was later injured in a bus accident at age of 18. Kahlo was subjected to an enormous amount of pain and turmoil early in her life.

While recovering from the bus accident Kahlo returned to her childhood hobby painting.

“Her and her husband Diego Rivera had a very tumultuous relationship,” Feazel said.

One of the pieces on display in The World of Frida depicts Rivera as her dog.

Kahlo died at 47, but her story continues to inspire artists of the 21st century.

THE WORLD OF FRIDA EXHIBIT

“You know to be able to bring in an exhibition of this size and this caliber and expose it to the people of Shreveport-Bossier, you know that’s all we want is just to provide a really wonderful experience for people to come in and enjoy,” Feazel said.

This World of Frida is a traveling exhibition and was originally at the Bedford Gallery in Walnut Creek, California before Carrie Lederer, the curator, took the show on the road. The exhibition has been shown at five different galleries, making Norton Art Gallery its sixth large venue showcase.

When Feazel saw The World of Frida on the Bedford Gallery’s website in 2018 she booked the exhibition immediately.

“When COVID hit this was my one thing that if we had to cancel this I would have cried, but it all worked out,” Feazel said. “We are going to do the best we can and hopefully get as many people in to see the show as possible.”

The World of Frida is on display for the public through Nov. 28.