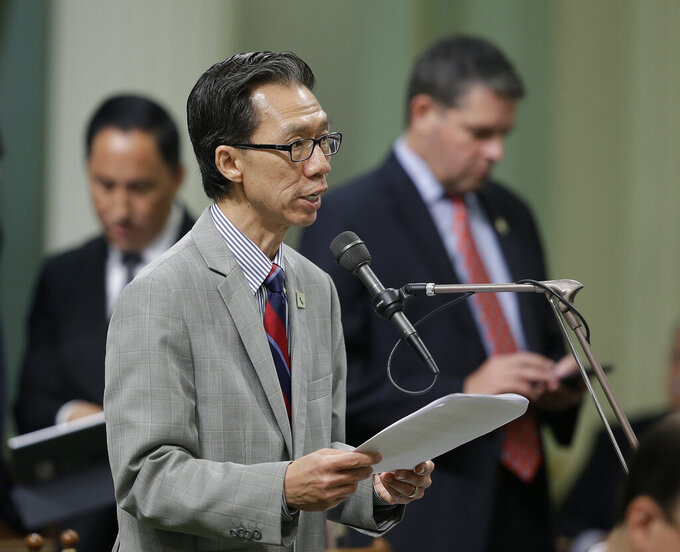 Chau, 64, has represented the San Gabriel Valley's 49th Assembly District since his election in 2012. He has his law degree from the Southwestern University School of Law and was in solo practice from 1994 until his election.

He would have been termed out of the Assembly in 2024 after representing a district in which 45% of voters are registered Democrats; 19% Republicans; and 32% no party preference.

Fong already was endorsed by Chau, U.S. Rep. Judy Chu and former Assemblyman Mike Eng, though the date of Chau's resignation and thus the special election has not yet been set.

Chau in a statement thanked Newsom, said he will miss his legislative colleagues and said representing the district “has been a true honor and privilege.”

Newsom's office said it doesn't have a complete record of sitting lawmakers appointed to judgeships, but said Assemblyman William J. McVittie was appointed to the San Bernardino County Superior Court by then-Gov. Jerry Brown in 1980.

California State Library legislative historian Alex Vassar, however, said McVittie was among three legislators who were appointed to the bench shortly after the end of their terms.

By his count, 37 sitting lawmakers resigned after being appointed to judgeships, but just 14 of them in the past 70 years. And the last one before Chau was then-Sen. Larry Stirling in 1989 — appointed by then-Gov. George Deukmejian more than three decades ago.

Brown did appoint four sitting legislators to the bench during his first two terms in office in the 1970s and 1980s, by Vassar's count.

Aside from Chau, Newsom on Monday announced his appointment of 10 other Superior Court judges, including two more in Los Angeles County and two in Sacramento County. Single appointments went to Alameda, Kings, Merced, Modoc, Nevada and Tulare counties.

Her nomination requires confirmation by the Commission on Judicial Appointments.