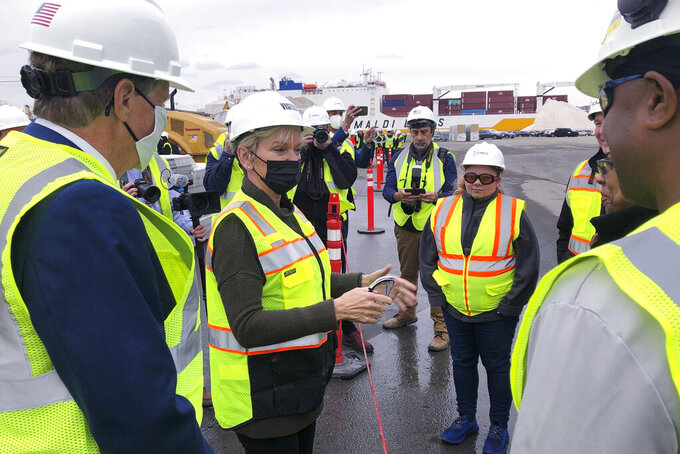 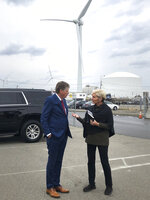 PROVIDENCE, R.I. (AP) — U.S. Energy Secretary Jennifer Granholm said Thursday that the administration's goal for offshore wind and the projects being developed now represent a “gust of job growth throughout the country.”

Granholm visited a new offshore wind manufacturing hub in Providence to talk about the Biden administration’s plan to deploy 30 gigawatts of offshore wind energy by 2030 and to promote the investments in the $1 trillion infrastructure deal.

“More offshore wind means more jobs for iron workers, line workers, engineers, electricians, plumbers, pipefitters," she said. “Jobs in mining and manufacturing and management and operations and sales, not to mention of course the benefit to surrounding communities."

At the Port of Providence, Orsted, a Danish energy company, and the utility Eversource are constructing a building for the fabrication and assembly of large, advanced components for turbine foundations. Orsted officials gave Granholm and Rhode Island Gov. Dan McKee a tour. The group met union workers who are building the facility.

McKee said he envisions Rhode Island as the “base camp” to support the offshore wind supply chain along the East Coast. Granholm said looking at the building reminded her of a proverb: “When the winds of change blow, some build walls, others build windmills.”

“And we know which side of that Rhode Island falls on,” she said.

Eversource President and CEO Joe Nolan said the Biden administration's support of offshore wind is a “breath of fresh air” after the Trump administration. Both Nolan and Orsted Offshore North America CEO David Hardy said such support is critical while the U.S. industry is still in the fragile, early stages.

“The momentum is happening,” Nolan said. “We need it to continue.”

“It's a young industry,” added Hardy. “We need help getting the first projects off the ground.”

Their manufacturing hub at the port is scheduled to be finished this spring to support two offshore wind projects, Revolution Wind and South Fork Wind.

Revolution Wind is a planned offshore wind farm south of Martha’s Vineyard, Massachusetts, to provide power for Connecticut and Rhode Island. The federal government is currently reviewing the construction and operations plan.

The South Fork Wind project will be located off the coast of Rhode Island. Its transmission system will connect to the electric grid on Long Island, New York, making it the state’s first offshore wind farm and jumpstarting the offshore wind industry there.

The interior department announced last week that the administration approved the construction and operations for South Fork Wind, as part of a plan to deploy 30 gigawatts of offshore wind energy by 2030. It was the administration's second approval of a commercial-scale, offshore wind energy project in the United States. The first commercial-scale project is off the coast of Massachusetts.

Granholm also visited a manufacturer of electric vehicle chargers and a clean energy technology company in Connecticut Thursday. On Friday, she's hosting a roundtable discussion in Boston about the transition to clean energy.

Granholm has been making stops around the country to talk about how investments in infrastructure incentivize companies like these to open and expand, driving the transition away from fossil fuels, creating jobs and helping people save money on energy. She is visiting areas that are proactive in reducing emissions and areas where more work needs to be done.

President Joe Biden signed his hard-fought $1 trillion infrastructure deal into law in November, declaring that the new infusion of cash for roads, bridges, ports and more is going to make life “change for the better” for the American people. It has $100 million for wind energy research and development, $2.5 billion for transmission lines, including transmission from offshore wind farms, and $20 million to ensure offshore wind is built sustainably, Granholm said.

The companion piece of legislation, the social and environment bill under consideration in the Senate, has $600 million for port infrastructure, as well as significant tax credits to incentivize offshore wind development and turbine manufacturing, she added.

This story has been updated to correct that the interior department, not U.S. Energy Secretary Jennifer Granholm, announced the approval of the South Fork Wind project.