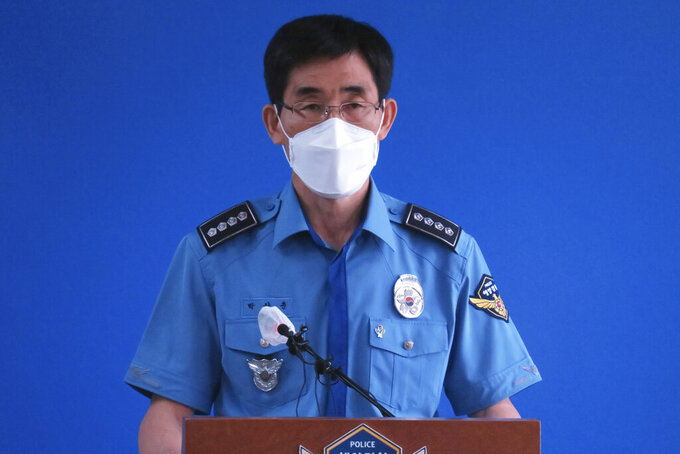 Kim Dong-young, ASSOCIATED PRESS
Park Sang-chun, head of the Incheon Coast Guard, speaks during a press conference in Incheon, South Korea, Thursday, June 16, 2022. South Korea’s new conservative government says there is no evidence that a South Korean official slain by North Korea near the rivals’ disputed sea boundary in 2020 had intended to defect to the North. (Newsis/Kim Dong-young via AP)

SEOUL, South Korea (AP) — Overturning its predecessor’s assessment, South Korea’s new conservative government said Thursday there is no evidence that a South Korean official slain by North Korea near the rivals’ disputed sea boundary in 2020 had intended to defect to the North.

The killing of the fisheries official has been a major source of domestic divide in South Korea, with conservatives accusing then-President Moon Jae-in's liberal government of failing to strongly respond to North Korea in the hopes of better ties. About a week after his killing, South Korean officials announced the man had gambling debts and swam to resettle in the North.

Disclosing confidential South Korean documents about the man’s death was a campaign promise by current President Yoon Suk Yeol, who won the March 9 election on the platform of taking a tougher stance on North Korean provocations.

On Thursday, coast guard and Defense Ministry officials said in a joint news conference that they haven’t found any evidence showing the official attempted to defect to North Korea voluntarily.

Senior coast guard officer Park Sang-chun said authorities have suspended an investigation on the unidentified North Korean soldier who allegedly killed the official, and plan to disclose relevant information on the incident.

Yoon’s presidential office separately said Thursday it’ll withdraw the Moon government’s appeal to a court ruling that ordered the disclosure of some government documents on the man’s death.

In September 2020, South Korea accused North Korea of fatally shooting the fisheries official before setting his body on fire, apparently in line with its tough anti-coronavirus measures. South Korean officials said the 47-year-old had disappeared from a government ship that was checking on unauthorized fishing in the area.

Moon’s government had sharply condemned the North’s action initially, but its criticism eased gradually after receiving a North Korean message that it said contained leader Kim Jong Un's apology over the case.

According to the North Korean message disclosed by South Korea, the North shot the official because he attempted to flee after refusing to answer questions and that it burned the object he was floating on, not his body.

To resolve some discrepancies, Moon’s government proposed a joint probe, but the North has ignored it.

During a parliamentary committee meeting at the time, then-South Korean Defense Minister Suh Wook said they believed the official was attempting to defect because he left his shoes on the ship, put on a life jacket and boarded a floating object. The coast guard later said he swam against unfavorable currents with the help of a life jacket and a floatation device and conveyed his intention of resettling in North Korea.

At the conference Thursday, Yoon said, “I can clearly tell you that there is circumstantial evidence that North Korea’s military fatally shot one of our nationals and burned his body.”

The statement comes amid heightened animosities over North Korea’s series of missile and other weapons tests this year. South Korean officials also said the North has completed preparations for its first nuclear test in about five years.

North Korea hasn’t immediately responded to the new South Korean assessment on the dead official, but its state-run Uriminzokkiri website on Thursday launched insults at Yoon, calling him “an idiot” and “a pro-U.S. flunkeyism maniac” over reports that he suggested an English name for a new Seoul park.

North Korea has a reputation for attacking U.S., South Korean and other foreign leaders with bombastic and derogatory rhetoric.

Yoon has offered “an audacious plan” to improve North Korea’s economy if it abandons its nuclear program. North Korea has previously rejected similar overtures by some of Yoon’s predecessors that linked support plans to North Korea’s denuclearization.