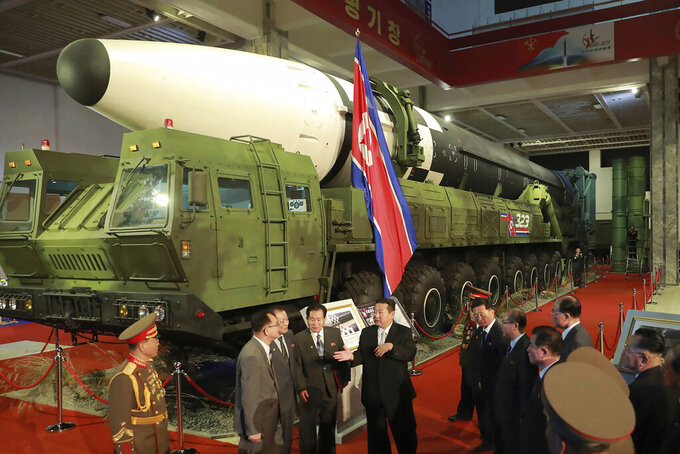 Uncredited, ASSOCIATED PRESS
FILE - In this photo provided by the North Korean government, North Korean leader Kim Jong Un, center, speaks in front of what the North says an intercontinental ballistic missile displayed at an exhibition of weapons systems in Pyongyang, North Korea, on Oct. 11, 2021. North Korea test-launched a suspected intercontinental ballistic missile and two shorter-range weapons into the sea Wednesday, May 25, 2022, South Korea said, hours after President Joe Biden ended a trip to Asia where he reaffirmed the U.S. commitment to defend its allies in the face of the North’s nuclear threat. Independent journalists were not given access to cover the event depicted in this image distributed by the North Korean government. The content of this image is as provided and cannot be independently verified. (Korean Central News Agency/Korea News Service via AP, File)

UNITED NATIONS (AP) — The United States called for a vote Thursday on a U.N. resolution that would impose tougher sanctions on North Korea for its recent launches of intercontinental ballistic missiles that can be used to deliver nuclear weapons.

The U.S. Mission to the United Nations has been working on the draft Security Council resolution for several months. But the measure faces opposition from North Korea’s neighbors China and Russia, which both said at a council meeting on May 11 that they wanted to see new talks and not more punishment for the North.

The United States, which holds the council presidency this month, announced plans for the vote Wednesday.

Whether China and Russia will use their veto power to block the measure or abstain remains to be seen.

“We don’t think a resolution as proposed by the U.S. can solve any problem,” China’s U.N. Mission said in a statement Wednesday evening.

China proposed in recent weeks that the U.S. consider a presidential statement instead of a resolution, which “was supported by many delegations but fell on deaf ears of the U.S.,” the statement said. “They know what is the best way for de-escalation but simply resist it.”

The announcement of the vote and the U.S. release of the 14-page draft resolution came hours after South Korea reported that North Korea test-launched a suspected ICBM and two shorter-range missiles. It also followed Tuesday’s conclusion of U.S. President Joe Biden’s Asia trip that included stops in South Korea and Japan, where he reaffirmed the U.S. commitment to defend both allies in the face of the North’s nuclear threat.

Wednesday’s launches were the 17th round of missile firings this year by the Democratic People's Republic of Korea, the country's official name. Experts have said North Korea wants to move ahead with its push to expand its arsenal and apply more pressure on its rivals to wrest sanctions relief and other concessions.

The Security Council imposed sanctions after North Korea's first nuclear test explosion in 2006 and tightened them over the years seeking to rein in its nuclear and ballistic missile programs and cut off funding.

In the last sanctions resolution adopted in December 2017, the council committed to further restricting petroleum exports to North Korea if it conducted a ballistic missile launch capable of reaching intercontinental ranges,

U.S. Ambassador Linda Thomas-Greenfield said May 11 that the North has launched at least three ICBMs. But she said that for the last four years, two members -- a clear reference to China and Russia -- “have blocked every attempt” to enforce the sanctions and update the list of individuals, companies and other entities subject to asset freezes and travel bans.

China’s U.N. ambassador, Zhang Jun, expressed regret on May 11 that the United States “remains enamored superstitiously of the magic power of sanctions,” which he said are not an appropriate way to address the situation.

He said that the direct talks between the U.S. and North Korea in 2018 produced positive results and a de-escalation of tensions on the Korean peninsula, but that the United States created the current impasse by not reciprocating to what he said were Pyongyang’s positive initiatives.

In addition to further restrictons on North Korea’s oil imports, the draft resolution would ban the sale or transfer of all tobacco products to North Korea and tighten maritime sanctions. It also would ban the North’s export of clocks and watches and their parts.

The resolution would also impose a global asset freeze on Lazarus Group, which was created by North Korea. It says Lazarus engages in “cyberespionage, data theft, monetary heists and destructive malware operations” against government, military, financial, manufacturing, publishing, media and entertainment institutions as well as shipping companies and critical infrastructure.

The measure would also freeze the global assets of Korea Namgang Trading Corporation, which sends North Korean laborers overseas to generate income for the government. It would do the same for Haegumgang Trading Corporation, which it says has worked with a Mozambique company under a $6 million contract that includes surface-to-air missiles, air defense radar and portable air defense systems.

The proposed resolution would add one individual to the sanctions blacklist, Kim Su Il, who it says is the Vietnam-based representative of the Munitions Industry Department responsible for overseeing development of the North’s ballistic missiles.