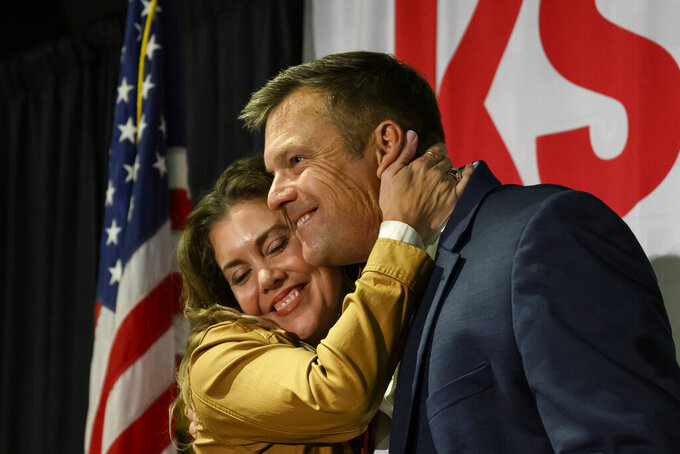 “Everyone loves a comeback story, and I am grateful to Kansas voters for giving me this opportunity to serve and for putting their trust in me," Kobach said in a statement Wednesday morning.

Mann did not concede. His spokesperson, Kelli Kee, said his campaign’s top priority is to make sure every vote is counted.

“We live in a democracy and in a democracy your vote is your voice, and we want to make sure that every Kansan has an opportunity to speak on this election,” Kee said. “This is an unprecedented election, and we need to make sure we are protecting the democratic process.”

Kobach was coming off losses in the Kansas governor's race in 2018 and a U.S. Senate primary in 2020 that Republicans chalked up to lackluster campaigns and political baggage that turned off independent and moderate GOP voters. But Republicans have long had a voter registration advantage in Kansas and have won 80% of the state’s down-ballot contests over the previous 50 years.

Many Republicans said that this year, they saw a Kobach who stayed more on message, had a better-organized campaign and came off as calmer and steadier than in the past. He talked less about illegal immigration and didn't use the signature prop of his 2018 run for governor, a Jeep painted in a flag design with a replica machine gun mounted on it.

But Kobach maintained a focus on tightening voting procedures in the absence of documented problems with fraud. In a mid-October debate, he said Kansas needed to rid itself of ballot drop boxes and that people who questioned whether there is voter fraud are “ignoring reality.”

His position put him at odds with current Kansas Secretary of State Scott Schwab, a Republican who said the state's elections are secure and drop boxes safe. An Associated Press survey of state elections officials found no cases in 2020 of fraud, vandalism or theft involving drop boxes that could have affected the results.

Kobach built a national profile and created lasting political enemies before his election as Kansas secretary of state in 2010 by becoming the go-to adviser for state and local officials wanting to crack down on illegal immigration.

He also pushed the idea that lots of people could be voting illegally and championed a tough prove-your-citizenship rule for new Kansas voters, only to see the federal courts strike it down. An early Kansas supporter of Donald Trump’s presidential bid in 2016, he was co-chairman of Trump’s short-lived presidential advisory commission on voter fraud.

Kobach told Republicans during his successful primary race this year that he would consider each morning over breakfast how as attorney general he could sue President Joe Biden's administration. But during his fall campaign, he tempered that rhetoric, saying that he'd challenge Biden actions that appeared to violate federal law or the U.S. Constitution.

Mann suggested that Kobach still would be involving Kansas in frivolous and expensive lawsuits and promised to focus on the office's “everyday” work such as public safety and consumer protection.

Mann became a police officer in the late 1990s in the northeastern Kansas city of Lawrence, but an on-duty accident involving a drunken driver ended his career in uniform after only a few years. He then went to law school and worked as a prosecutor in Kansas City, Kansas, and as a state securities regulator before starting a private practice. He also served on the national board of Mothers Against Drunk Driving.