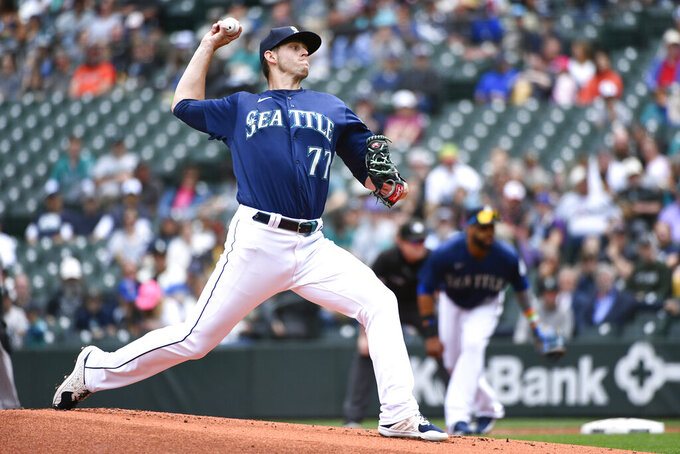 SEATTLE (AP) — Julio Rodríguez claimed not taking a peek at where his 12th home run of the season finally came to rest.

Maybe he should have. Not many homers at T-Mobile Park land where the 21-year-old deposited his latest longball.

“That’s a long way to home run in this ballpark. You don’t see it too often,” Seattle manager Scott Servais said.

Rodríguez hit a two-run homer as part of Seattle’s six-run fourth inning, and the Mariners beat the Baltimore Orioles 9-3 on Wednesday for their seventh win in nine games.

The Mariners took two of three from Baltimore and continued a stretch of good baseball after a 5-1 road trip last week.

Rodríguez's long ball was the highlight on a day there was finally plenty of offense for Seattle starter Chris Flexen. Rodríguez's shot was estimated at 431 feet and landed in the first row of the second deck in left-center field.

Rodríguez, who was the AL rookie of the month in May, could be in line to win the award again in June. He’s hitting .288 with seven doubles, six homers and 15 RBIs for the month.

He wasn’t alone in giving the Mariners an offensive jolt and it was the bottom of the lineup that provided the greatest impact. Abraham Toro, Adam Frazier and Sam Haggerty combined for seven hits and six runs scored. Haggerty had two doubles and a bunt single.

Servais was thrilled Seattle had three sacrifice flies as well. The Mariners started the day with just 16 on the season. Seattle was also 5 for 13 with runners in scoring position.

“I think anybody who watches us on a daily basis understands the situational heating and getting guys in from third, and getting that big hit with runners in scoring position has been a struggle for us. But we did a lot of really good things today,” Servais said.

Flexen (4-8) had received zero or one run of support while on the mound in nine of his first 14 starts this season, so getting nine runs was a welcomed change.

Given the big lead, Flexen cruised through six innings allowed three runs on seven hits. Trey Mancini had a two-run double and Ryan Mountcastle an RBI double. Seattle starters have allowed three earned runs or less in 26 of the past 27 outings.

Baltimore starter Austin Voth (0-1) lasted just three innings pitching against his hometown team for the first time in his career. Voth allowed four hits, but only one earned run in his third start with the Orioles this season.

Reliever Nick Vespi was roughed up for six runs on six hits and recorded just one out.

Mariners: OF Taylor Trammell was placed on the 10-day injured list after re-aggravating a right hamstring injury from earlier in the season. Trammell missed time while in the minors at the start of the season due to the injury. He was hurt running out a grounder in Tuesday’s game. Servais said Trammell is likely out at least a couple of weeks. ... Seattle selected OF Marcus Wilson and recalled IF/OF Sam Haggerty from Triple-A Tacoma. IF Kevin Padlo was optioned to Tacoma and C Tom Murphy was transferred to the 60-day IL to clear a 40-man spot for Wilson.

Wilson made his debut in the majors as a pinch-hitter in the eighth inning and walked. Wilson, 25, was a second-round pick by Arizona in 2014. He was claimed off waivers by Seattle last year.

Orioles: After a day off, Baltimore will open a three-game series in Minnesota on Friday. The Orioles have not announced a starter for that game.

Mariners: RHP Logan Gilbert (8-3, 2.44) looks to strengthen his case for an All-Star nod as Seattle opens a series against Oakland. Gilbert has won three of his last four decisions and tossed at least five innings in every start this season.