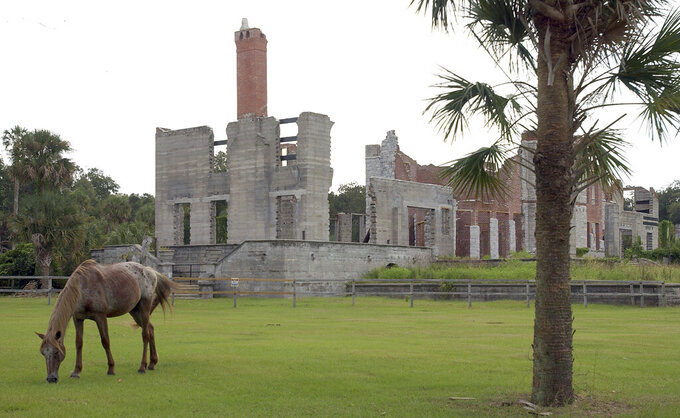 Chris Viola, ASSOCIATED PRESS
FILE - In this Sept. 20, 2008, file photo, a wild horse grazes next to the ruins of the Dungeness mansion in the south end of Cumberland Island in Camden County, Georgia National Seashore. Officials in a Georgia county say they're moving ahead with plans to build a launch pad for commercial rockets barely a month after residents voted to halt the project by a margin of nearly 3-to-1. Commissioners in coastal Camden County said in a statement Thursday, April 14, 2022 they have approved purchasing 4,000 acres for the proposed Spaceport Camden. (AP Photo/Chris Viola, File)

SAVANNAH, Ga. (AP) — Officials in a Georgia county are moving ahead with plans to build a launch pad for commercial rockets barely a month after residents voted to halt the project by a margin of nearly 3-to-1.

Commissioners in coastal Camden County confirmed in a statement Thursday that they voted earlier in the week to “approve the purchase of ... property where the spaceport would be located.”

The decision followed a March 8 referendum in which 72% of voters sought to halt the project by overruling commissioners' prior vote to buy land for the proposed Spaceport Camden.

Camden County officials have spent the past decade and more than $10 million pursuing a commercial spaceport for launching satellites into orbit. Commissioners say the project would bring economic growth not just from rocket launches, but also by attracting related industries and tourists to the community of 55,000 people on the Georgia-Florida line.

Opponents say the plans to build the spaceport on an industrial plot formerly used to manufacture pesticides and munitions poses potential environmental and safety hazards that outweigh any economic benefits. They forced the referendum by gathering more 3,500 petition signatures from registered voters to put the project on the ballot.

Critics, including the National Park Service, say rockets exploding soon after launch could rain fiery debris onto Little Cumberland Island, which has about 40 private homes, and neighboring Cumberland Island, a federally protected wilderness visited by about 60,000 tourists each year.

A big loss at the polls hasn't stopped county officials. Commissioners called a meeting Tuesday and voted unanimously to notify Union Carbide Co., which owns the 4,000-acre (1,600-hectare) industrial site on which the county hopes to build the spaceport, that they plan to move forward with the land purchase.

“It’s a continuation of arrogance and ignorance and just not representing the will of the people,” said spaceport critic John Goodman, an elected councilman for the Camden County city of St. Marys. He said commissioners were defying "a very clear indication from the citizens to not be in the spaceport business.”

Goodman was one of the spaceport opponents who sued earlier this year to stop the county from buying the land before the referendum could be held. He said they likely will go back to court to again ask a judge to halt the purchase.

The referendum upended the spaceport project at a critical juncture. After years of study and review, the Federal Aviation Administration granted Camden County a license in December to build and operate the spaceport, which would join 12 others already operating in the U.S.

But before commissioners could close on purchasing the property, a judge ordered that the land deal be put before voters.

Commissioners said in their statement Thursday that they expect the Georgia Supreme Court to declare the referendum invalid. The county has an appeal pending before the court that argues the state constitution doesn’t allow voters to veto government projects such as the spaceport. No date has been scheduled to hear the case.

Commissioners have previously dismissed the referendum, in which 17% of registered voters cast ballot, as reflecting the will of a “bare minority.” Steve Howard, the county government administrator, recently has said the county is seeking private investors to help finance the spaceport. Then came the vote Tuesday to move forward with the land purchase.

“The board determined that moving forward in this fashion was in the best interest of the county in order to protect the launch site operator license that was recently issued and the millions of dollars the county has invested so far in the spaceport,” the commissioners' statement said.

Whether the landowner agrees to sell to Camden County with court cases over the spaceport still pending remains to be seen. Union Carbide said in a statement Thursday that it's evaluating the company's option agreement with Camden County “in light of the county's ongoing litigation."