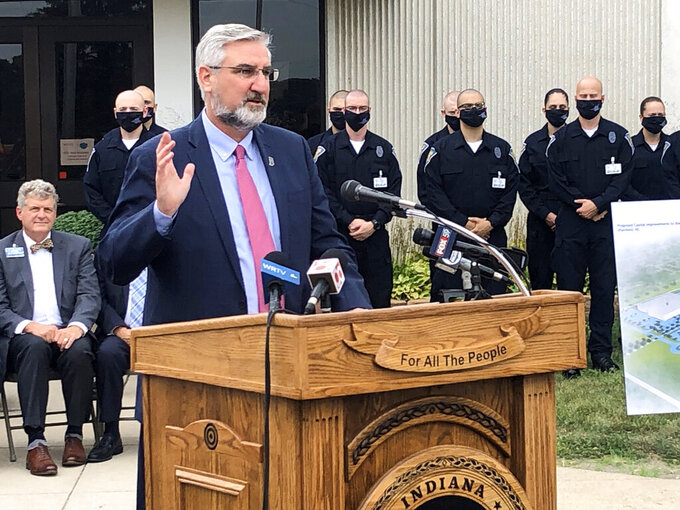 INDIANAPOLIS (AP) — Indiana Gov. Eric Holcomb issued seven pardons to convicted criminals during his first year in office, including a man who spent eight years in prison despite evidence he was wrongly convicted of armed robbery.

Holcomb, however, hasn’t granted any more pardons in the past 3-1/2 years as officials say the number of applications for the governor to clear criminal records has declined to a trickle, The (Fort Wayne) Journal Gazette reported.

Indiana’s expansive expungement law — first passed by the Legislature in 2013 — has meant fewer people seeking pardons as that process of asking a judge to clear past convictions is both simpler and more private, said Charles Miller, vice chairman of the Indiana Parole Board.

“Quite frankly, I knew the numbers were way down, but even I was shocked by just how low they were,” Miller said. “Speaking personally, pardons are the best part of my job, as you get to the good things people accomplish after what is usually just an unfortunate mistake.”

The pardons Holcomb issued in 2017 were largely holdovers from when Mike Pence was governor.

The most prominent case was that of Keith Cooper, whose pardon request over his conviction for a 1996 robbery in Elkhart languished under Pence even as the state parole board, the local prosecutor and witnesses supported his exoneration.

Cooper’s request, which the parole board recommended be granted in 2014, received renewed attention after Pence became Donald Trump’s vice presidential running mate in 2016. Cooper has a federal wrongful conviction lawsuit pending against the northern Indiana city over police misconduct allegations.

Holcomb rejected three pardon applications in 2018, but the parole board held no pardon hearings during 2019. Miller said two people applied but later withdrew the petitions after learning of the expungement law. The board conducted no pardon hearings in 2020 because of COVID-19 precautions.

Miller said when he joined the parole board in 2013, it received calls nearly every day about the pardon process. Now the board gets one or two a month.

To be eligible for a pardon, five years must have passed since the completion of a person’s sentence for a state conviction.

Holcomb said he considers whether the person seeking a pardon has learned from their mistake and made up for their actions.

“We have a process where we review anything that is recommended for review,” Holcomb said. “I look at it. And I ask a lot of questions. I want to see how someone who has been incarcerated has devoted their time while inside the gate ... how they’ve changed their life, what they’ve given back to society.”