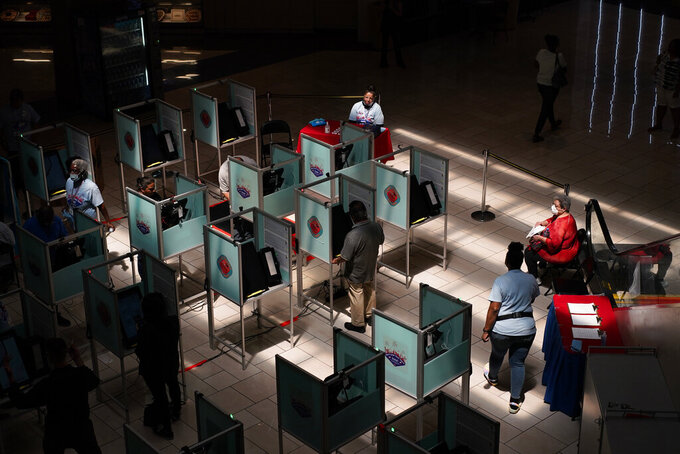 John Locher, ASSOCIATED PRESS
FILE - Workers help as people vote at a polling place during the primary election in Las Vegas on June 14, 2022. Nevada's Democratic congressional members used a strong midterm showing as evidence for why they should be the first Democratic primary stop in a joint statement on Friday, Nov. 18, 2022, urging the Democratic National Committee to put the state in the top slot. (AP Photo/John Locher, File)

RENO, Nev. (AP) — Nevada’s Democratic congressional members in a Friday statement urged the Democratic National Committee to make the Western swing state the first stop of primary season and pointed to a strong midterm showing as evidence for why it should be in the top slot.

It’s the latest in a growing debate over who should gain the political clout of being first in the nation as Iowa’s half-century run stands on shaky ground. For months, that state's delegates have fended off criticism that it does not have a diverse enough electorate and that it is not predictive of which candidate will win the primary.

The Nevada congressional members said the outcome of the midterm election — including Sen. Catherine Cortez Masto’s re-election after many deemed her the most vulnerable incumbent — “cemented why we should hold the first presidential primary.”

“Nevada is a working class, pro-labor state with one of the most diverse populations in the country and a commitment to voting rights that is a model for the nation,” they said.

Nevada is mainly competing alongside New Hampshire, Iowa and South Carolina as the party opened up its process for the first spot earlier this year. The party’s rules committee is set to meet at the beginning of December to decide the new calendar.

New Hampshire has hinged its argument on grassroots politics and the potential for Democrats to lose future elections if it ceases to be in one of the top slots. The Iowa delegation promised changes to its caucus, including expanded vote-by-mail after technical glitches extended the 2020 results. South Carolina delegates have touted the state’s size, diversity, affordability and accessibility to candidates.

Nevada has a large share of working class voters with a strong union presence and large Latino, Filipino and Chinese American populations. The letter cited a demographic diversity — from the Las Vegas and Reno metro centers to tribal and rural communities — that can be predictive of a primary win across the country.

“If you’re a presidential candidate and you can win in Nevada, you have a message that resonates across the country,” Cortez Masto said on MSNBC earlier this week, calling the state “a microcosm of the rest of the country.”

Nevada Democratic strategist Rebecca Lambe also outlined in a memo first reported by Politico that the midterms “underscore Nevada’s record of beating the odds to deliver for Democrats.”

“The voters who make up our electorate represent the future of the Democratic Party if we want to win national elections: working class Latino, Black, Asian American, Native American, and white voters,” Lambe wrote. “Simply put, we cannot win 270 electoral votes or Congress without prioritizing the diverse, blue-collar coalition that Nevada represents.”

Stern is a corps member for the Associated Press/Report for America Statehouse News Initiative. Report for America is a nonprofit national service program that places journalists in local newsrooms to report on undercovered issues. Follow Stern on Twitter: @gabestern326.