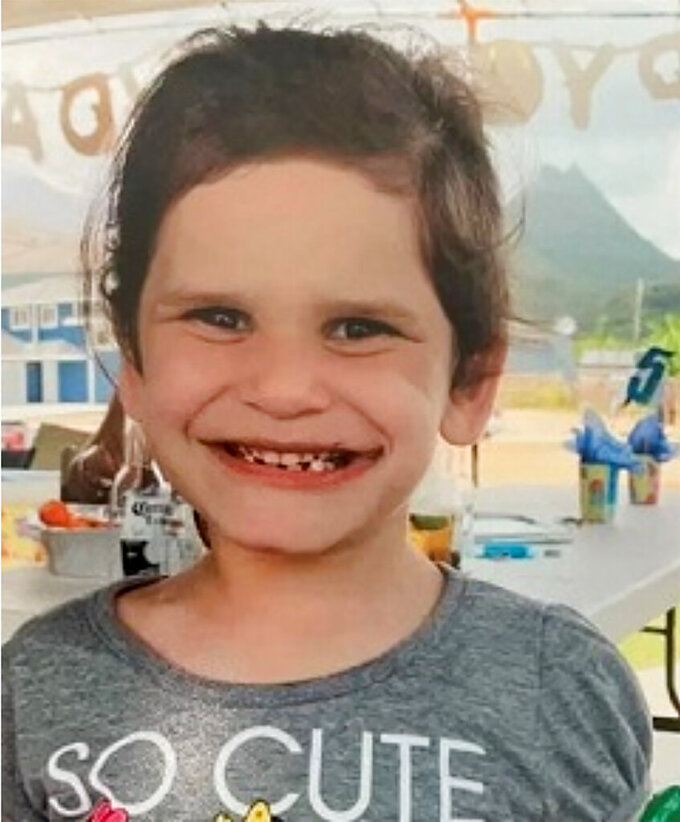 Uncredited, ASSOCIATED PRESS
This undated photo provided by the Honolulu Police Department shows Isabella Kalua who was last seen sleeping in her room in Waimanalo, near the eastern end of the island of Oahu, at about 9 p.m. on Sunday, Sept. 12, 2021, Honolulu police said. The search resumed Wednesday, Sept. 15, for the missing 6-year-old girl. Authorities are seeking the public's assistance in locating Isabella. (Courtesy of Honolulu Police Department via AP)

Isabella Kalua was last seen sleeping in her room in Waimanalo, near the eastern end of the island of Oahu, about 9 p.m. on Sunday, Honolulu police said.

Police described the brown-eyed, brown-haired girl as white and mixed race. Police believe she would have been wearing a black hoodie, black leggings, colorful socks and Nike slides with pink bottoms.

“Her family and friends are concerned for her safety and well-being,” Honolulu CrimeStoppers said in a news release.

Volunteers and authorities have been searching since Monday.

Interim police Chief Rade Vanic updated the Honolulu Police Commission on the search Wednesday. “At this point we … don’t have sufficient evidence to show the child was abducted,” he said.

Isabella had been living with the Kaluas for four years, and at some point within the past year or so, the Kaluas adopted her and changed her name, Alena Kaeo, a cousin of Isabella's biological mother, told the Honolulu Star-Advertiser.

Isabella's biological mother, Melanie Joseph, told the newspaper that the last time she saw her daughter on a scheduled visit was about a year ago.

“It has been devastating, really devastating,” Kiara Galdeira, another biological aunt, told Hawaii News Now. “We just wish we could’ve done more. And we just want her home. I don’t think she would ever wander off.”

“Droves of volunteers from Waimanalo and beyond," have been searching, along with dozens of police officers and first responders, police said.

They searched neighborhoods, beaches and parks on foot and by air Tuesday, police said.

“It's obvious that she comes from a caring family and community, and we are hopeful that we will find her soon and find her safe,” Vanic said. “At this time, we’re asking neighbors to check their yards and properties for anywhere that a young child might go to or be able to hide. If you have home security video, please check to see if there’s anything that might help us.”