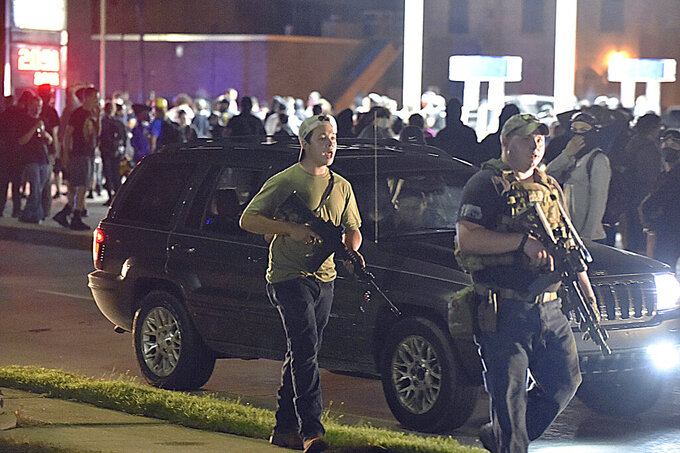 ADAM ROGAN, ASSOCIATED PRESS
FILE - Kyle Rittenhouse, left, with backwards cap, walks along Sheridan Road in Kenosha, Wis., Tuesday, Aug. 25, 2020, with another armed civilian. The trials of Rittenhouse and three men accused of killing Ahmaud Arbery had vastly different outcomes. But coming just days apart, they laid bare a dangerous and long-running current in the fight for racial equality: The move by some white Americans to grab guns and take their own stand against perceptions of lawlessness, particularly by Black people. (Adam Rogan/The Journal Times via AP, File)

The trials of Kyle Rittenhouse and three men accused of killing Ahmaud Arbery had vastly different outcomes. But coming just days apart, they laid bare a dangerous and long-running current in the fight for racial equality: The move by some white Americans to grab guns and take their own stand against perceptions of lawlessness, particularly by Black people.

The two cases, which ended with an acquittal for Rittenhouse last week and guilty verdicts for Arbery's killers on Wednesday, highlighted polarizing issues about gun and self-defense laws, and racial injustice.

They also forced the questions: Who or what is being protected? And from whom? Should peace of mind for white Americans come at the expense of the protection and safety of Black Americans?

“So much of this issue about protection and safety is about the safety and the protection of whites or white property,” said Carol Anderson, historian and professor of African American studies at Emory University. “There is a hubris of whiteness. The sense that it is on me to put Black lives back into their proper place.”

Arbery, a Black man, was chased and shot to death by white men suspicious of an outsider in their predominantly white Georgia neighborhood. In Wisconsin, while both Rittenhouse and the three men he shot were white, the encounter was triggered by the 17-year-old’s decision to travel from his Illinois home to Kenosha and arm himself with an AR-15 rifle, bent on protecting local businesses from Black Lives Matter protesters.

The unmistakable connection: The idea that white men who perceive a problem “should grab a gun and wade into trouble and then claim self-defense,” said Michael Waldman, president of the Brennan Center for Justice at the NYU School of Law.

“This is a product of a gun culture. It’s also a product of laws ... that give white men with guns the ability to create chaos and sometimes get away with it,” said Waldman, author of “The Second Amendment: A Biography.”

Both also came at the end of a year that began with an insurrection at the U.S. Capitol, in which an overwhelmingly white crowd of supporters of former President Donald Trump, enraged with the idea that the 2020 election was “stolen” from them, stormed the building in an effort to take ownership of the government.

The impetus for raiding the Capitol, Anderson said, was the unfounded claim that there was massive amounts of voter fraud in cities where there were sizable Black populations, “the notion that Black folks voting is what stole the election.”

“That’s the thing about vigilantism, it’s that something precious to me, for me, for my community, is being stolen and it’s being stolen by the unworthy, by the undeserving,” Anderson said.

White vigilantism signifies “the need to keep the Black population, particularly the Black male population, under surveillance and under control,” said writer Darryl Pinckney. It has evolved over time, but there is a long history in the U.S. of people taking the law into their own hands — and of white Americans using that as a pretext to violently enforce racial boundaries.

Pinckney pointed to vagrancy laws and Black Codes, passed after the Civil War, that aimed to control freed slaves. “Laws that say, ‘if you can’t say where you live, you can be locked up and made to work on the chain gang for some time.’” During segregation, Black people were told they were in the wrong place. In the days of integration, it was a questioning of why Black people were in a particular place — a demand for proof that they belonged in order to put white people “at ease.”

Arbery’s death recalls the 2012 killing of Trayvon Martin, a Black teen, by a white Hispanic man patrolling his Florida subdivision against supposed criminals. For many Black Americans, that case served as a cautionary tale that just being Black could make them targets, said Angela Onwuachi-Willig, dean of Boston University’s law school.

To Willig, there was a direct line between the killing of Martin and the notorious 1955 lynching of Emmett Till, a Black teen visiting Mississippi from Chicago who was brutally slain by a pair of white vigilantes convinced the 14-year-old had whistled at a white woman. And the Arbery case is yet another reminder of the lingering malice that may await Black Americans who dare to cross into areas regarded as white strongholds, she said.

Organized violence against Black people by ordinary white American citizens has a long history in the U.S. and was often perpetrated with either explicit or tacit approval from authorities, said Ashley Howard, an assistant professor of African American history at the University of Iowa. She pointed to slave patrols that set out to capture suspected fugitive slaves and lynching cases, where jailers would often step aside or provide keys to give mobs access to Black suspects.

Arbery's killers “were operating under that kind of slave patrol code, which basically deputized all whites to have the power to question anybody Black about why are you here? What are you doing here?” Anderson said.

During the civil rights movement, police would often turn a blind eye to white vigilantes coming to Black communities to put down protests, Howard said. The violence was fueled by a false perception that Black people were aggressing against whites.

“It’s this feeling that the world that they know is being attacked,” Howard said of white vigilantes. “It is being threatened and they need to literally pick up arms and defend it against the roving mobs or however they are being framed and understood.”

While Rittenhouse’s victims were three white men, race stood at the heart of his case, too, given that he decided to take up arms in defense of property during a Black Lives Matter protest, and his victims were white men who were standing up for the equal treatment of Black Americans. “Attacking the white allies of Black liberation has always been a part of the story,” Pinckney said.

Elijah Lovejoy, a white abolitionist and newspaper editor, was fatally shot by a pro-slavery mob in Alton, Illinois, in 1837. His killers were found “not guilty.”

James Peck, a white activist during the civil rights movement, was deemed a race traitor by the KKK, brutally beaten to a “bloody pulp” during the Freedom Rides, as civil rights activist John Lewis described it.

Viola Liuzzo, a white civil rights activist who participated in the Selma to Montgomery marches in 1965, was shot and killed by Ku Klux Klan members.

In today’s context, following persistent pleas that “Black lives matter” and many white people heeding the call to join the movement, discomfort and fear around a loss of white identity or power are being stoked once again, and some feel increasingly emboldened to address it.

“White identity has never been challenged to this degree or abandoned to this extent by other white people,” Pinckney said. “There is a real sense of betrayal, and that’s part of the fear — this loss of status or the devaluation of personal whiteness.”