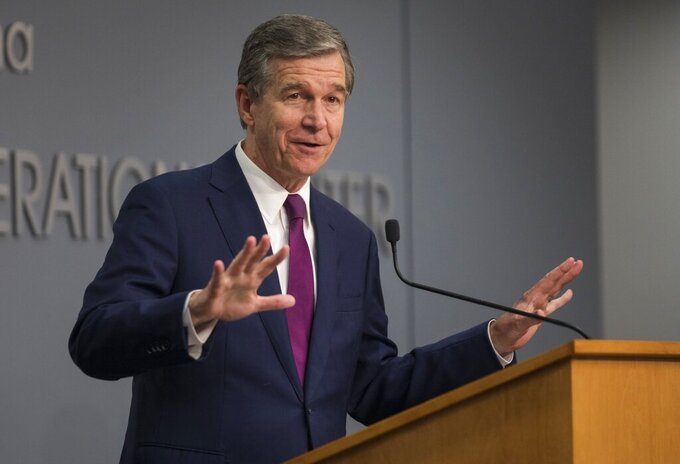 Julia Wall, ASSOCIATED PRESS
FILE - In this July 21, 2021 file photo, North Carolina Gov. Roy Cooper speaks to reporters during a COVID-19 news conference at the state Emergency Operations Center in Raleigh, N.C. Interest in COVID-19 vaccines has surged in the week since Cooper announced, Tuesday, Aug. 10, his administration would boost the financial incentive from $25 to $100 for unvaccinated residents who come in for their first shot this month. (Julia Wall/The News & Observer via AP, File)

Addressing a panel he created to help comply with legal rulings in a decades-old school funding case, Cooper said there's no excuse for the state to fail to carry out the multi-year plan Judge David Lee approved, particularly for the next two years. The state's coffers are overflowing with several billion dollars of surplus or unspent revenues.

“As we enter these new trilateral budget negotiations ... I will work as hard as I can for strong investments in this plan so that we can make it a reality,” Cooper told the Commission on Access to Sound Basic Education. “We have a transformational opportunity here. We have the funding.”

The separate Senate and House budget fell well short of the $1.7 billion in new education spending Cooper proposed through mid-2023 to meet a leg of the $5.6 billion remedial plan Judge Lee signed. Lee said recently if the plan is not fully funded before a scheduled Oct. 18 court hearing, he will consider ways to take action. That could include holding the General Assembly in contempt or issuing monetary penalties.

“This court is prepared to implement the judicial remedies at its disposal,” Lee wrote in an order dated last week and released later Tuesday.

Republican leaders, particularly in the Senate, have chafed at the judge's directives, saying funding decisions are exclusively the purview of the legislature, not the courts.

In the Leandro litigation — named after an original plaintiff — the state Supreme Court ruled in 2004 that the state’s children have a fundamental right to the “opportunity to receive a sound basic education,” but that the state had not lived up to that mandate. Interest in compliance with the rulings grew as Lee took over monitoring the case and a consultant’s report in 2019 declared little progress had been made to comply.

The plan developed by Cooper and the State Board of Education aims to spend more than $5.5 billion in new education funding through 2028. The proposal includes funding improvements to help low-income students and those with disabilities. There’s increased pay for teachers, principals and assistant principals, as well as efforts to improve teacher diversity and competency and child access to prekindergarten.

The commission, composed of former legislators, educators and others, passed unanimously a resolution Tuesday urging “all state bodies, entities, and agencies to take all necessary actions" to carry out the plan.

“Funds amply exist" to fully fund the next two years of the plan, said Rick Glazier, a panel member, former lawmaker and current executive director of the left-leaning North Carolina Justice Center. “And now the state has to comply. And this is not a discretionary task, lest we leave the constitution to be a nullity — and it clearly is not.”

Berger’s press office, responding to commission discussions, tweeted Tuesday that tactics and threats by those pushing for full Leandro funding “have irreparably poisoned the well.”

Despite the differences over education funding, there’s been more optimism this year from the legislative and executive branches that Cooper can sign a two-year budget bill into law. He vetoed similar budget bills in 2017 and 2019.

“There seems to be a real willingness now to negotiate in good faith as we move forward,” Cooper told commission members in the online meeting. “I know this, that we have to continue fighting to implement this plan at all levels and in all ways.”