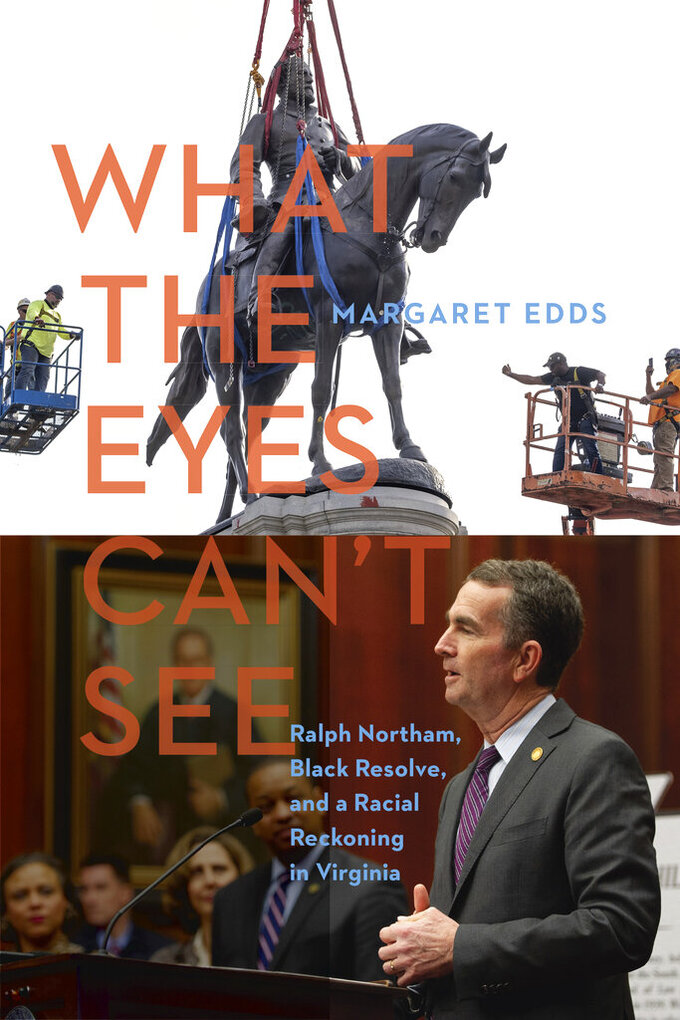 Uncredited, ASSOCIATED PRESS
This image provided by the University of South Carolina Press shows the cover of "What The Eyes Can't See," a book about former Virginia Gov. Ralph Northam, by author Margaret Edds, a retired journalist. An investigative effort to uncover the origins of a racist photo on Northam’s medical school yearbook page has ended inconclusively, according to the author, who has written this book that offers new details about the 2019 scandal and the former governor's remarkable political survival. (University of South Carolina Press Via AP)

RICHMOND, Va. (AP) — A Virginia author's investigative effort to uncover the origins of a racist photo on Ralph Northam’s medical school yearbook page has ended inconclusively, according to the author, who has written a book that offers new details about the 2019 scandal and the former governor's remarkable political survival.

“Of course, I would like to have determined exactly who was in the photograph. And I gave that my best effort,” Margaret Edds, a retired journalist and the author of “What the Eyes Can't See,” told The Associated Press ahead of the book's November publication.

Although Edds — like journalists and two groups of law firm investigators before her — did not arrive at any definitive answer about the photo of one person in blackface and another in a Ku Klux Klan costume, her 296-page book offers a behind-the-scenes look at the turmoil the image sparked. The book details Northam’s decision to remain in office despite tremendous pressure, as well as the steps he took to become better informed about the legacy of racism, redeem his reputation and work with Black leaders to sharpen his administration’s focus on racial justice.

Northam participated in 14 interviews for the book, a digital review copy of which was provided to AP by The University of South Carolina Press. “What the Eyes Can't See” also draws on interviews with Northam's wife, Pam Northam, staffers, consultants, friends and public officials, plus documents and contemporaneous news reports.

Mark Bergman, a longtime political adviser to Northam who was among those interviewed, said Northam participated because he thought the book would serve as “the final word on what his service was about.” Northam, who returned to work as a pediatric neurologist after leaving office in January, declined comment through Bergman.

The photo surfaced in 2019 when a conservative political website published it while Northam was embroiled in a controversy over remarks he made about late-term abortion. The image appeared along with three pictures that showed Northam on his personal page in the 1984 Eastern Virginia Medical School yearbook.

Northam initially apologized for being in the photo without saying which person was him. Then he reversed course, saying he wasn’t actually in the photo. The move did not initially quell widespread calls for his resignation. But Virginia’s 73rd governor refused to step down, and the pressure eased after the state’s two other top Democratic officeholders became caught up in controversies of their own.

Northam went on to preside over an undeniably transformative term in office as Democrats took full control of state government in the 2019 election cycle. Northam would sign into law bills that made Virginia a progressive outlier in the South — including the legalization of marijuana, abolition of the death penalty and expansion of gun control.

Edds said she was inspired to write the book when she heard that Northam had decided to remove an enormous state-controlled statue of Robert E. Lee in Richmond.

The book was not a collaboration, said Edds, who told the governor she wouldn’t guarantee he’d like what she wrote.

As for the photo, Edds may not have discovered who was in it, but she did manage to get the editor of the yearbook — who previously had avoided reporters and investigators — to open up.

She also captured the chaos of the initial news breaking, including the reactions of various high-profile Democratic leaders. The book explores Northam’s response to the lack of support, as well as his efforts to regain the trust of fellow Democrats. It weaves in chapters of Virginia’s history, as well as Northam’s, exploring his family tree and formative parts of his childhood on Virginia’s Eastern Shore. In it, Northam acknowledges specific instances in which he thinks white privilege boosted his career.

Northam may have had the most integrated childhood of any Virginia governor and initially saw thought of himself as someone who “didn't see race," Edds said.

“To me, it was a powerful moment when he came to recognize that it’s not that admirable not to see race if you’re not seeing all the underlying systemic racism that affects people’s lives,” she said.

Edds emphasized that the book is not only a “story of personal redemption” for Northam, it's also an exploration of the way Black legislators and citizens both encouraged and pushed Northam toward change.

Edds, who spent 34 years working in journalism in Virginia, mostly at The Virginian-Pilot, has previously authored several other books, including works about the commonwealth's history and the civil rights movement.

Her latest book's title is a reference to a turn of phrase — “the eyes can't see what the brain doesn't know” — that Northam favors and has used with medical students, as well as to describe his own transformation.

The book is slated to go on sale Nov. 8.