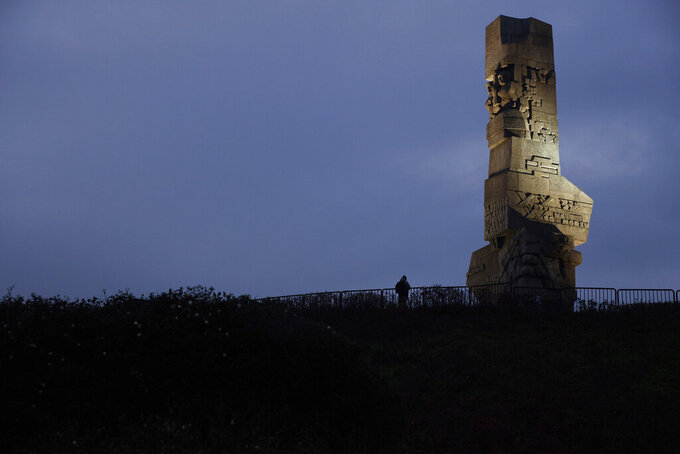 Michal Dyjuk, ASSOCIATED PRESS
A man stands in front of the monument to Polish defenders of the Westerplatte peninsula in Gdansk, Poland, Tuesday, Dec. 6, 2022. Ahead of elections next year, the Polish nationalist conservative ruling party has been ratcheting up its anti-German rhetoric while seeking to cast its main domestic challenger as loyal to Berlin. Critics of the government see the anti-German campaign as an electoral tactic but also worry that it could create another crack in the Western alliance at a time of Russia's war in Ukraine. (AP Photo/Michal Dyjuk)

WARSAW, Poland (AP) — Poland's ruling party leader claims Germany seeks to dominate Europe. He warns that Poles could end up under the “German heel." He snubs a German offer of anti-missile systems before Poland eventually accepts them — but gets in an anti-German dig along the way.

Ahead of elections next year, Jaroslaw Kaczynski and the nationalist conservative ruling party that he leads have been lashing out against Germany while seeking to cast their main competitor as loyal to Berlin.

Many Poles, like others in central Europe, have been critical of Germany’s stance toward Russia in the years leading up to Russia’s Feb. 24 invasion of Ukraine, particularly for gas deals that created dependence on Russian energy and helped Russia build up its war chest.

But critics of the ruling party, Law and Justice, say its anti-German rhetoric is becoming a threat to Poland's national interests and risks creating a crack between Western allies while Russia wages war in Ukraine.

They have been especially critical of the party's vacillations over whether to accept a German offer to deploy three Patriot missile defense systems to Poland after a stray missile fell in Poland near the border with Ukraine last month, killing two Poles.

Kaczynski reacted coolly to the offer early on, and said the Patriots should be placed in Ukraine instead — something unacceptable to Germany.

Kaczynski also said that "Germany’s attitude so far gives no reason to believe that they will decide to intercept Russian missiles.”

Defense Minister Mariusz Blaszczak finally announced Tuesday that Poland would accept the Patriots after all. But he added that he was “disappointed” to have to accept Germany's “decision to reject the support of Ukraine.”

Critics of the government see such slights as an electoral tactic meant to win votes from older Poles who remember World War II, which was sparked by Nazi Germany's invasion of Poland. The war killed 6 million Polish citizens, about half of them Jews.

But many Poles also have positive associations with modern Germany, having studied or worked there. Their large western neighbor is a major trade partner to Poland and an ally in NATO and the European Union, and President Andrzej Duda is expected to visit Berlin on Monday.

Law and Justice faces a tough road as it seeks to win a third term, with challenges including soaring inflation — currently running above 17% — and billions of euros blocked by the EU over what the bloc views as democratic backsliding under the conservative party.

It remains unclear how successful anti-German rhetoric will be in the elections next year, coming 77 years after the end of WWII and with many Poles highly anxious about the current war in Ukraine. Many voters also see the economy as their top concern.

Pawel Gruszecki, a 37-year-old IT specialist from the southern Polish city of Katowice, has traveled to Germany often for business and pleasure, including last summer when he took advantage of the wildly popular “9-euro ticket” to visit several German cities.

He describes the anti-German rhetoric as “very sad,” and says he tries to ignore it otherwise it makes him angry.

“I am not susceptible to it,” he said. But he added that conversations with his elderly neighbors have left him convinced that frequent dispersions of Germany carried by state media are deepening their suspicions of Germany.

Agnieszka Lada-Konefal, a Polish expert on Polish-German relations, argues that anti-German rhetoric is meant to energize a small percentage of the electorate — votes that could be critical for a party that has held only a slim majority in parliament for most of its time in power since 2015.

She said that while many Poles agree that Germany never did enough to compensate Poland for its war losses, polling reveals a Polish society with largely positive views of its neighbor.

“Most Poles are not anti-German,” said Lada-Konefal, who is vice-director of the German Institute for Polish Affairs in Darmstadt, Germany.

This week a Polish government official visited Berlin to press government demands for $1.3 trillion in war compensation, a bill it presented to Berlin this fall. Critics see the demand as an election tactic because Berlin has long said there is no legal basis for paying war reparations. The Warsaw government insists the bill is not timed to coincide with the election campaign and that compensation is a matter of fundamental justice.

Party leader Kaczynski last year accused Germany, which is the largest country in the 27-member EU, of using its role in the bloc to try to rebuild the “Fourth German Reich.”

Last weekend, he returned to the theme of Germany's alleged efforts to strip sovereignty from EU states and dominate Europe. He claimed that Berlin was using peaceful means to achieve aims that “it once wanted to implement using military methods.”

He also accuses the main opposition party, Civic Platform, and its leader Donald Tusk of being loyal to Germany, saying they would bring Poland “under the German heel.”

The allegations of Tusk's loyalty to Germany are often repeated by state media and government loyalists.

During a parliamentary session last week, deputy climate minister Jacek Ozdoba requested a break in proceedings “so that Civic Platform can watch the match of its German national team, which is playing at the moment” in the World Cup. That led to an uproar in the assembly.

Law and Justice has successfully tapped into memories of German atrocities to win votes in the past.

In the 2005 presidential election, the party revealed that Tusk, the front-runner, had a grandfather who served in Hitler’s army.

Tusk's grandfather was a Polish forced laborer who was enlisted against his will in the Wehrmacht and later fled to join the Polish army.

The “Wehrmacht affair” hurt Tusk and he was defeated by Lech Kaczynski, the late twin brother of the current party leader.