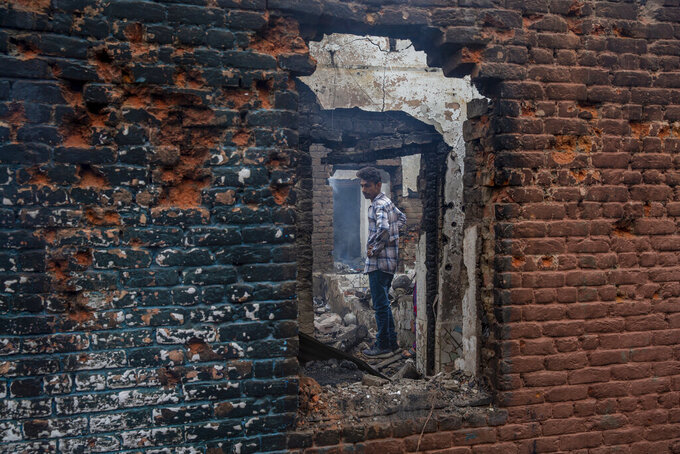 Dar Yasin, ASSOCIATED PRESS
A Kashmiri villager stands on the debris of a house destroyed in a gunfight in Pulwama, south of Srinagar, Indian controlled Kashmir, Wednesday, July 14, 2021. Three suspected rebels were killed in a gunfight in Indian-controlled Kashmir on Wednesday, officials said, as violence in the disputed region increased in recent weeks. Two residential houses were also destroyed. (AP Photo/ Dar Yasin)

The Indian military said militants opened fire at soldiers and police as counterinsurgency troops surrounded a neighborhood in the southern town of Pulwama on a tip that militants were hiding there.

Troops retaliated and trapped the militants in a house, a statement by the military said. Three militants were killed in an ensuing eight-hour operation and two rifles and a pistol were recovered from the site, the statement said.

Villagers said troops set fire to one house and blasted another with explosives, a common anti-militancy tactic employed by Indian troops in the disputed Himalayan region.

Authorities issued a curfew in Pulwama town and cut off internet on mobile phone services, a tactic aimed at making organizing anti-India protests difficult and discouraging dissemination of protest videos.

Shortly after the shootout, anti-India protesters threw stones at government forces and chanted slogans seeking end of Indian rule over the region. Government forces fired tear gas at the protesters. No one was reported injured during the clashes.

Locals said government troops detained several people and forced them to sit in front of them as shields during the clashes.

Wednesday’s fighting comes amid a surge in violence in the region, which is divided between India and Pakistan with both the nuclear-armed rivals claiming it in its entirety.

Last week, authorities in the region also dismissed 11 Kashmiris from their government jobs for alleged links with rebel groups. They included two sons of a top Kashmiri rebel commander who is based in Pakistani-controlled Kashmir and two police officials.

Rebels in Kashmir have been fighting Indian rule since 1989. Most Muslim Kashmiris support the rebel goal of uniting the territory, either under Pakistani rule or as an independent country.

India insists the Kashmir militancy is Pakistan-sponsored terrorism. Pakistan denies the charge, and most Kashmiris consider it a legitimate freedom struggle.

Tens of thousands of civilians, rebels and government forces have been killed in the conflict.