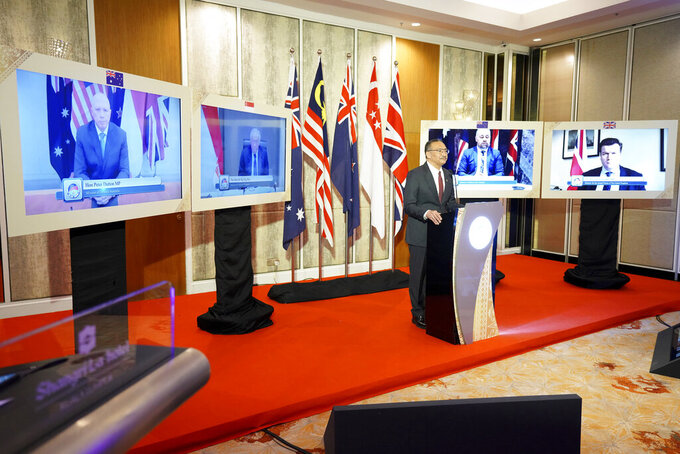 Uncredited, ASSOCIATED PRESS
In this photo provided by Malaysia Defense Ministry, Malaysian Defense Minister Hishammuddin Hussein speaks during a press conference after the Five Powers Defense Arrangements (FPDA) meeting in Kuala Lumpur, Malaysia, Thursday, Oct. 21, 2021. The FPDA, which involves Commonwealth members Malaysia, Singapore, Australia, New Zealand and the U.K., is a non-binding treaty formed half a century ago. The countries are to consult each other in the event of armed threats or attacks on former British colonies Malaysia and Singapore. (Malaysia Defense Ministry via AP)

KUALA LUMPUR, Malaysia (AP) — Australia and Britain on Thursday defended their nuclear submarine deal with the U.S. amid concerns it could escalate tensions in the region and spark an arms race.

U.K. Minister for Armed Forces James Heappey said there “has been a lot of overhyping” of the pact known as AUKUS. He said the U.K. and the U.S. have been sharing such technologies for decades and that Australia’s decision to join was merely to develop its own submarine capability.

The pact will provide Australia with nuclear reactors to power its submarines but the subs will not be nuclear-armed. It drew mixed reactions in the region, with Malaysia and Indonesia expressing concern it could escalate tensions in hotspots such as the South China Sea. China, which claims most of the disputed sea, slammed the pact and warned it would threaten regional stability.

Others such as the Philippines, which claims part of the South China Sea, suggested AUKUS could help restore balance in the region, alluding to China's growing military might. Singapore was more guarded, but has voiced hope the pact will contribute constructively to regional peace.

“It doesn’t in any way reflect reduction in our friendships with colleagues and allies. It doesn’t in anyway represent a challenge in your part of the world,” Heappey said in an online news conference after meeting with his counterparts in the Five Powers Defense Arrangements.

The FPDA, which involves Commonwealth members Malaysia, Singapore, Australia, New Zealand and the U.K., is a non-binding treaty formed half a century ago. The countries are to consult each other in the event of armed threats or attacks on former British colonies Malaysia and Singapore.

Australian Defense Minister Peter Dutton agreed that AUKUS is “not a defense alliance or a security pact" and doesn't represent a shift in his country's defense strategy. He said the pact is aimed at improving Australia's defense capability and will complement its partnerships in the region, including FPDA.

Dutton said Australia has no intention of interfering in the operations of other nations, and will continue to maintain close ties to ensure the region remains secure and prosperous.

”AUKUS will complement our collective efforts to meet the challenges and the changing circumstances in the Indo-Pacific so that it remains stable, secure, prosperous and free from coercion,” he said.

Malaysian officials earlier said they were worried that AUKUS could provoke other powers to act more aggressively in the region, especially in the South China Sea. Malaysia has said it doesn't want to be dragged into the U.S.-China rivalry. Malaysia, along with China, Vietnam, the Philippines, Brunei and Taiwan all claim part of the South China Sea.

Singapore's Ng noted earlier this month that it could take Australia more than a decade to deploy its first nuclear-powered submarine. He told Parliament that Singapore encourages any security groupings to contribute constructively to regional security through open dialogue and activities that are “non-confrontational, do not escalate tensions and promote a rules-based order."

While Malaysia and Singapore don't face any particular threats, Hishammuddin said the FPDA remains relevant and will continue to focus on issues such as counterterrorism. transnational crime and regional maritime tensions. The five nations earlier this week wrapped up an annual defense exercise involving ships, aircraft and 2,600 personnel to mark their 50th anniversary.