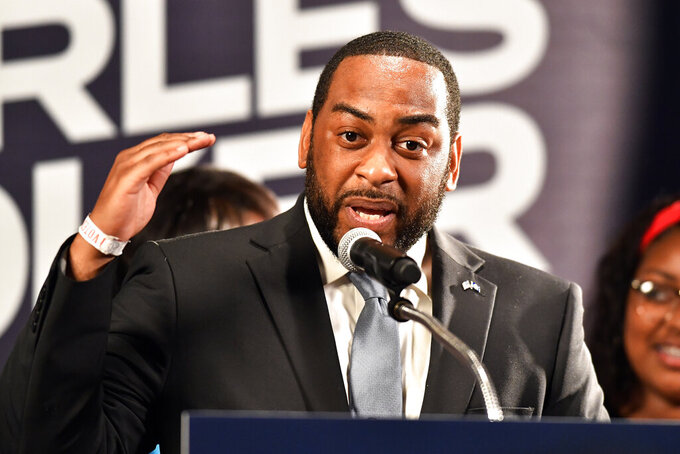 LOUISVILLE, Ky. (AP) — Kentucky Democrat Charles Booker appears on camera with a noose around his neck to condemn Republican U.S. Sen. Rand Paul for blocking anti-lynching legislation two years ago — a personally searing ad for a trailblazing Black candidate who says some of his own ancestors were lynched.

The new online ad — which comes with a warning about its content — shows a grisly photo of a lynching victim dangling from a tree. But it fails to mention that Paul co-sponsored a new version of the Emmett Till Anti-Lynching Act that cleared Congress this year and was signed into law by President Joe Biden. The measure, named for the Black teenager whose 1955 killing in Mississippi became a galvanizing moment in the civil rights era, made lynching a federal hate crime.

The ad exemplifies Booker's no-holds-barred approach to confronting racial and economic justice issues in a mostly rural, conservative-leaning state where only about 8% of the population is Black. And it ignores Paul's long-running outreach into mostly Black neighborhoods to discuss criminal justice issues and ways to turn around economically distressed communities, improve schools and combat gun violence.

The libertarian-leaning Paul will face Booker in a November matchup in a state that hasn't elected a Democrat to the Senate since 1992. The ad shows that Booker, the first Black major party nominee for U.S. Senate in Kentucky, won't shy from raising issues that might make some Kentuckians uncomfortable.

Booker's ad zeroes in on Paul's efforts to stall the anti-lynching legislation in 2020. At the time, Paul said the legislation was drafted too broadly and could define minor assaults as lynching. Booker says it's an example of Paul embracing divisive politics.

But the ad contains a broader message aimed at the “continued assaults on humanity,” Booker said Wednesday in an interview, pointing to mass shootings haunting the nation.

“The choice couldn’t be clearer,” Booker says in the ad, which debuted Wednesday. “Do we move forward together? Or do we let politicians like Rand Paul forever hold us back and drive us apart?"

Paul's campaign said the senator worked to strengthen the anti-lynching legislation and overlooking that role amounts to "a desperate misrepresentation of the facts.” In his own response, the senator said Thursday that he's made reaching out to Black communities a priority.

“I’ve introduced over two dozen bipartisan criminal justice reform bills,” Paul said in a statement to The Associated Press. "I fought to pass a strong anti-lynching bill. To this day, I continue to work hand in hand with community leaders on issues like violence and its effect on Louisville’s youth and their education and look forward to keeping up those efforts when I’m re-elected this November.”

Ricky L. Jones, a professor and chair of the Pan-African Studies Department at the University of Louisville, tweeted: “Some people are calling this ‘controversial’ — even ‘disgusting.’ I think it’s one of the most powerful political ads I’ve ever seen!”

But Booker needs to avoid alienating some white voters who might wonder why he's using a lynching-themed ad to attack Paul, White said. Booker has embraced a “hood to the holler” theme to promote his progressive agenda and show the shared interests of inner city and rural voters.

Booker first gained statewide prominence in 2020 when he marched with protesters as a Senate candidate to demand justice for Breonna Taylor and other Black people killed in encounters with police. His campaign surged, but he narrowly lost the Democratic primary that year to an establishment-backed opponent.

Booker routinely invokes his past to promote policy, talking about rationing his insulin as he touts his plan to expand health care access. In the new ad, he talks about how lynchings were "used to kill my ancestors” while standing next to a tree, a noose looped around his neck.

He had great-great-uncles on his mother's side of the family who were lynched, he told the AP.

“It was crushing to put that rope around my neck,” Booker said Wednesday. “I felt the weight of history when I did it. I imagined my uncles, you know. But I feel that being in this unique position gives me a responsibility, and it requires me to be vulnerable so that we can face hard truths.”

Booker said he realized the ad could cause “discomfort” for some Kentuckians but hoped they “can see my sincerity."

The ad includes the eerie creaking sound of rope hanging from a tree branch. Booker's hands grip the rope around his neck as he talks, then he removes the noose and walks away. It's a moment steeped in symbolism aimed at people feeling frustrated and hopeless, he said.

“I want to tell the story that we can change things,” Booker said. “That we can get the healing and the brighter future that we deserve, but it's going to require us to stand together.”