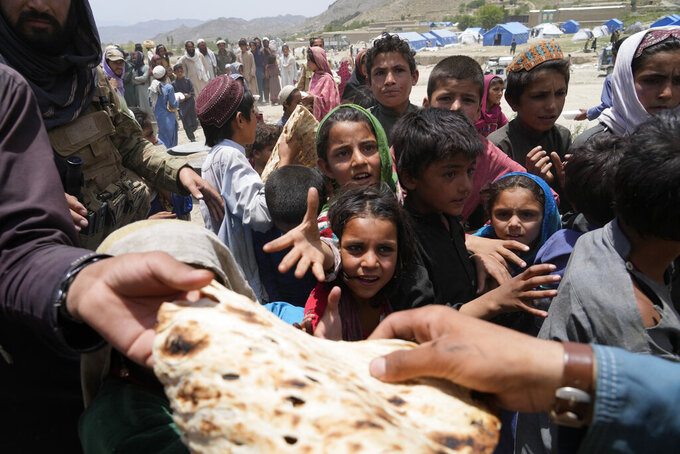 DUBAI, United Arab Emirates (AP) — A staggering 71 million more people around the world are experiencing poverty as a result of soaring food and energy prices that climbed in the weeks following Russia's invasion of Ukraine, the United Nations Development Program said in a report Thursday.

The UNDP estimates that 51.6 million more people fell into poverty in the first three months after the war, living off $1.90 a day or less. This pushed the total number globally at this threshold to 9% of the world's population. An additional 20 million people slipped to the poverty line of $3.20 a day.

In low-income countries, families spend 42% of their household incomes on food but as Western nations moved to sanction Russia, the price of fuel and staple food items like wheat, sugar and cooking oil soared. Ukraine's blocked ports and its inability to export grains to low-income countries further drove up prices, pushing tens of millions quickly into poverty.

“The cost of living impact is almost without precedent in a generation... and that is why it is so serious,” UNDP Administrator Achim Steiner said at the launch of the report.

The speed at which this many people experienced poverty outpaced the economic pain felt at the peak of the pandemic. The UNDP noted that 125 million additional people experienced poverty over about 18 months during the pandemic’s lockdowns and closures, compared with more than 71 million who hit poverty in just three months after Russia’s invasion of Ukraine in late February.

“The speed of this is very quick,” said George Molina, UNDP chief economist and author of the report.

Among the 20 countries hit hardest by inflation are Haiti, Argentina, Egypt, Iraq, Turkey, the Philippines, Rwanda, Sudan, Ghana, Kenya, Sri Lanka and Uzbekistan. More people in these countries, some of which have been roiled by political turmoil like Sudan and Sri Lanka, are facing poverty, according to the UNDP. In countries like Afghanistan, Ethiopia, Mali, Nigeria and Yemen, the effects of inflation are felt deeply by those already at the lowest poverty line.

The total number of people living in poverty, or are vulnerable to poverty, stands at over 5 billion, or just under 70% of the world’s population.

In Ghana, where the daily minimum wage is just $1.80 a day, people are struggling under the weight of inflation. Albert Kowfie, a 27 year-old security guard in Accra, Ghana, said a loaf of bread costs the equivalent of over $2 and commuting to work costs another 20 cents.

“It means that by the end of the first week (of work), everything is gone,” he said, expressing frustration at the government for not doing more to alleviate the burden. “I don’t answer my mother’s calls anymore because I know she needs help since she is not on any pension, but what can l do?”

Another U.N. report released Wednesday said world hunger rose last year with 2.3 billion people facing moderate or severe difficulty obtaining enough to eat — and that was before the war in Ukraine.

There is a need for the global economy to step up, Steiner said, adding that there is enough wealth in the world to manage the crisis, “but our ability to act in unison and rapidly is a constraint”.

The UNDP recommends that rather than spending billions on blanket energy subsidies, governments instead target expenditure to reach the most impacted people through targeted cash transfers that can prevent a further 52.6 million people from falling into poverty at $5.50 a day.

For cash-strapped and debt-laden developing countries to achieve this, the UNDP called for an extension of debt payments that had been in place during the pandemic among the world's richest nations.

Steiner said doing so is not only an act of charity but is also “an act of rational self interest" to avoid other complex trends, such as economic collapse in countries and popular protests already taking place in communities across the world.

The war in Ukraine has roiled a region known as the world’s bread basket. Before the war, Russia was the world’s largest exporter of natural gas and the second biggest exporter of crude oil. Russia and Ukraine combined accounted for almost a quarter of global wheat exports and more than half of sunflower oil exports.